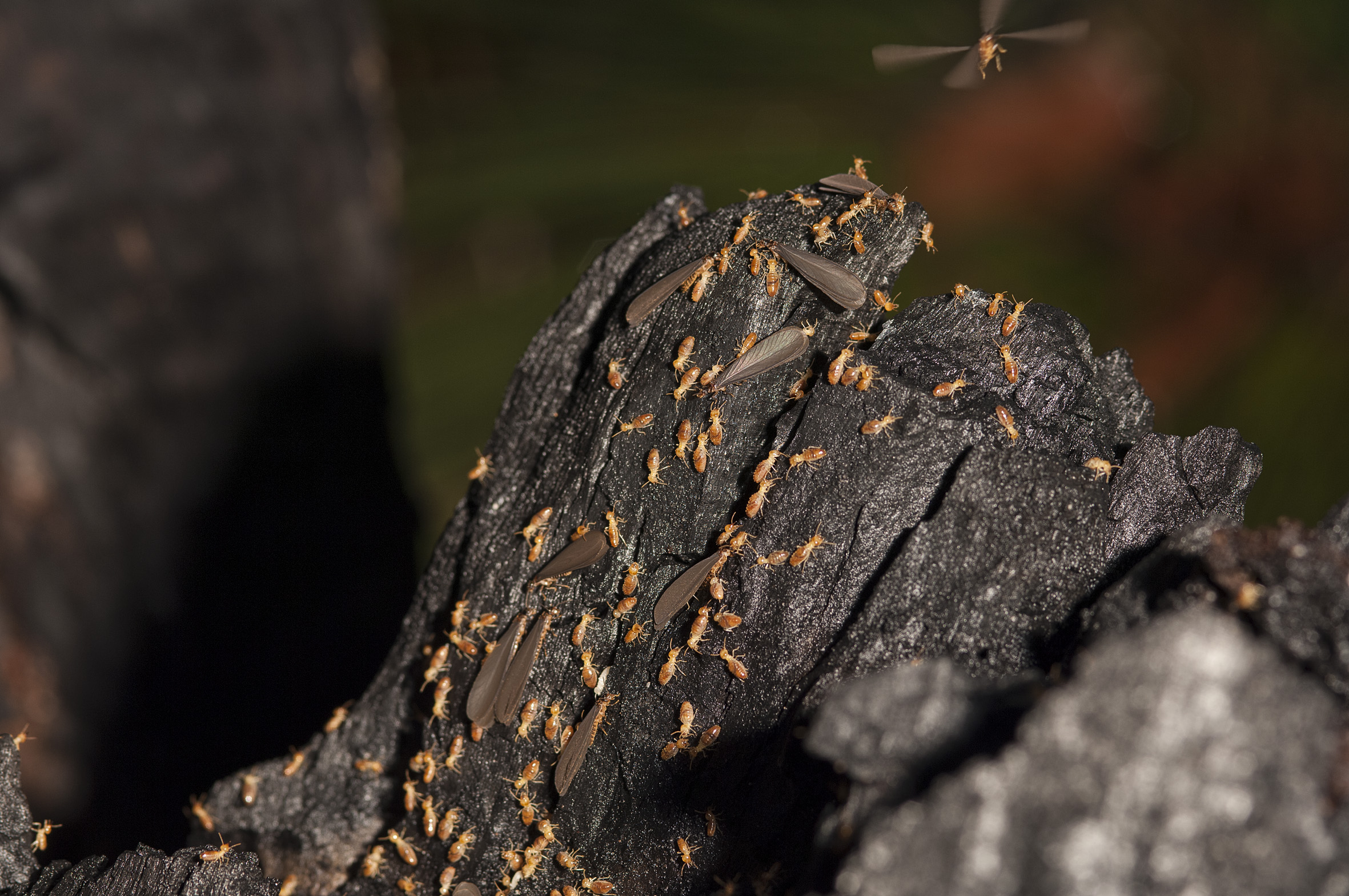 The arrival of insects en masse can cause alarm, but as you will see an ‘invasion’ may not necessarily result in an infestation requiring management.

Just as our borders were reopening post-COVID, there were some arrival flights of a different kind in my region. Not ants as I described in Pest Files of September 2019, but mass flights of termites and aphids in late October/early November.

Termite flights are usually spectacular events, especially when all the nests of the same species within a region fly simultaneously. In my region, they usually fly on a warm spring evening just prior to, or during, a major rain event. This year the flight was massive. The sky was full of fluttering termites during the evening, and my front porch was awash with discarded termite wings the next morning.

Some termites managed to make it indoors by following us through the front door at night, so there were discarded wings and dead termites littering the floor next morning. I was not in the least bit worried because these mass flights are colonising flights comprising male and female reproductive termites, not worker termites which are the wood chewers. Even if a male and female reproductive termite managed to find each other, mate and survive long enough to find a suitable nest site, my house was in no danger from them. At such an early stage, the termites were merely colony pioneers, and incapable of damaging a building.

It’s not surprising that termite flights cause alarm in some people when a Google search of ‘termite flight’ will result in a list of links to domestic pest control companies. It’s a pity that the search term doesn’t default to a description of termite colonies, and how they are made up of different castes − queens, kings, soldiers and workers.

Worker termites build protective nests in trees, underground, in giant mounds, or within human-built timber constructions. Nests are complex structures with many chambers and galleries and, depending on the species, may contain over a million inhabitants. Worker termites collect food for nest inhabitants and can travel above or below ground in specially constructed mud-like shelter tubes or walkways. When conditions are warm and humid, nests release many winged reproductive termites to spread out and form new colonies.

Reproductive termites shed their wings as soon as they land and males and females form pairs. The new queen and king then seek out a place to start a nest. They seal themselves into a small nuptial chamber, mate, and after a few days the queen begins to lay eggs. Her abdomen grows and she becomes an enormous (30 mm) egg laying machine capable of laying more than 1000 eggs per day.

That’s assuming they make it that far. Even if there are hundreds of thousands, if not millions, of termites participating in a flight only a tiny minority will actually survive long enough to begin reproducing. As soon as they leave the safety of the nest there are predators waiting to pick them off. Large birds such as magpies usually sit on the nest picking them off as they leave the nest hole, and if they make it into the air, birds such as swifts and swallows make short work of them.

Termites flying closer to ground level are easy pickings for predatory insects such as dragonflies, which dart through the flying termite mass just like sharks rip through schools of fish. When the termites land, they are even more vulnerable. Spiders, ants, predatory beetles, and more birds, all have a field day.

By morning at my place, most of the termites that had survived were on their last legs and were being picked up by the dawn patrol of small birds such as scrub wrens and superb fairy wrens. In morning light, it could be seen that spiders had been busy overnight, as there were lots of termites securely wrapped up in spider webs.

Even if some termites survive long enough to mate and make it to safety and begin reproducing, success is not guaranteed. Termites are at their most vulnerable as a new colony is developing, and many colonies fail to reach maturity due to predation, dehydration, or starvation.

The other reason people need not be alarmed by termite flights, is that of the 350 or so species of termite which occur in Australia, only a handful are pests which eat houses. Termites play important environmental roles such as digesting cellulose-based plant material, recycling nutrients and aerating soil. The famous mound-building termites of northern Australia are harmless grass feeders, and are responsible for recycling massive amounts of organic material. Research shows that termites actually play a role in hot, dry areas of Australia similar to the role that earthworms play in cooler, wetter areas.

Now for the aphids. The aphid flight this year lasted for several days either side of the same rain event which brought out the termites. This year was one of the biggest aphid flights I have ever seen. Once again, I wasn’t alarmed as I was certain that the beneficial insects in my garden would control any infestations which ensued. I’ve been writing about aphids quite a bit lately, including in last month’s Pest Files where I described how an infestation of cabbage aphids was brought under control by parasitic wasps.

Winged adult aphids are produced when an aphid colony has to migrate from an over-wintering site, or from drying plants, or when conditions become too crowded. This year’s aphid flights could be a combination of these factors. Last month I mentioned the UK’s Rothamsted Insect Survey which includes a suction trap network for aphids. The survey monitors airborne aphids and provides an early warning system for crops that are at risk. It was originally set up in the 1960’s as part of a move to encourage farmers to reduce insecticide use in their crops. Back in the day, the prophylactic use of insecticides was de rigueur.

The aphid suction-trap network comprises 16 traps, each 12.2 metres tall that continuously measure the aerial density of flying aphids and provide daily records during the main aphid flying season (April–November). Numbers of aphids caught in the air represent the numbers likely to be found in crops, so it’s a fabulous resource for farmers.

Why 12.2 metres? After much experimentation it was found that despite overall insect density decreasing with height, at greater heights aphids make up proportionally more of the total insects caught. Alarmingly, the latest research out of Rothamsted shows that many aphid species are flying a month earlier than what they did 50 years ago. Just one of the impacts climate change is having on pest insects.

When aphids descend, they begin to give birth straight way. Adult aphids are usually all female and they usually give birth to live young which is why aphid colonies can expand rapidly. Biological control is the mainstay of Integrated Pest management (IPM), and with aphids there are multiple biological control agents that can help control aphid outbreaks. There are a range of parasitic wasps, many of which have been introduced into Australia to control various species of aphids. Then there are the predators such as ladybird beetles (adults and larvae), and the larvae of hover flies and lacewings, among others.

Just like last month’s story about parasitic wasps controlling cabbage aphids, I have another story to tell. This time about rose aphids (Macrosiphum rosae). I found several clusters on a rose bush, feeding up near the buds as they do. There had been a lot of hoverflies in the garden and I assumed their larvae would bring the aphids under control. They did. Within a week!

Adult hover flies are a familiar sight flying about among flowering plants. The adult flies feed on pollen and nectar and are important pollinators. Female hover flies lay their eggs in or near an aphid colony so their larvae don’t have far to go to get food when they hatch a few days later. Larvae usually grow to about 12 mm long, are legless and maggot shaped. They consume as many as 30 aphids per day each, and bring aphids under control because, if there are enough of them, they can feed faster than the aphids can breed.