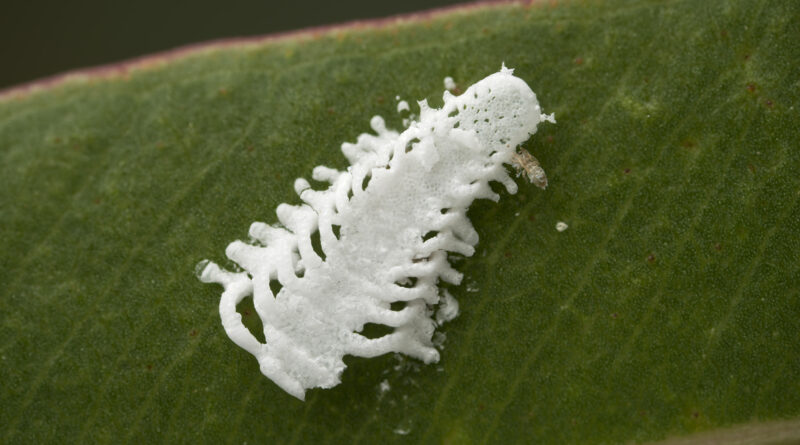 Sap-feeding insects may be quite small, but they usually leave signs of their feeding activity.

I had a couple of speaking engagements at the Melbourne International Flower & Garden Show (MIFGS) this year. I was always on the lookout for insect specimens to show people, either the insects themselves, or the damage they cause, or other signs of their activities.

On the corner of Rathdowne Street and Victoria Street, the south-west corner of the MIFGS site, I found what I was looking for, a magnificent lemon scented gum (Corymbia citriodora), leaves shiny with honeydew and covered in lerps. It couldn’t have been easier for me. Each morning as I passed the tree, I grabbed a small sample to show the audience.

I wrote about lerps in HJA Pest Files back in April 2011. I guess that is so long ago I should do a very quick update. The term ‘lerp’ refers to the white sugary, waxy covering which the immature stages of some psyllid insects (family Psyllidae) create. They produce these protective lerps from their own liquid excretions known as honeydew. The waxy lerp covering is an obvious sign of psyllid presence on eucalypt leaves, as the insect itself is less than 4mm long and difficult to see.

Lerps are often distinctively shaped which gives a clue to the genus of the psyllid insect which is underneath. The lerps I collected on the lemon scented gum were white in colour with a distinct ‘fern leaf’ pattern which indicated that it was in the genus Eucalyptolyma.  While in Melbourne, I also found some lemon scented gums by the Yarra River with similar psyllid populations. Post MIFGS I identified the psyllids as Eucalyptolyma maideni, a species known to occur on Corymbia citriodora.

The honeydew produced by sap-feeding insects such as psyllids is a way for the insect to deal with excess plant sugars accumulated during feeding. Insects such as these feed directly on phloem sap which is high in plant sugars. The dominant compounds in phloem sap are sugars derived from photosynthetic carbon fixation. In many plants, most of the sugar is in the form of sucrose. The insect does not need this enormous amount of sugar, so it must excrete the excess. What comes out of the rear end of a phloem sap-feeding insect is predominantly sugar.

The leaves of plants that have a high population of sap-sucking insects, such as the psyllids on the lemon scented gum, take on a shiny appearance and are sticky to the touch. It was no surprise that when I handed around bunches of leaves for people to look at more closely, some people were reluctant to touch them.

Apart from psyllids, common sap-feeding insects include mealybugs, scale insects, aphids, whitefly, and large bugs such as crusader bugs and harlequin bugs. All of them are members of the bug order Hemiptera. But not all of them excrete honeydew and promote the growth of sooty mould, because not all of them feed on phloem sap. Some sap-feeding insects feed on leaf tissue between the veins in the mesophyll. These include thrips, some leafhoppers, lace bugs and some scale insects. Non-insect mesophyll-feeders include mites such as spider mites. Symptoms of mesophyll feeding include a stippled pattern of yellowish, grey or whitish dots on the upper surface of leaves.

Scale insects are very common on citrus plants. But they may be either honeydew producing soft scale insects, or non-honeydew producing hard scales. A dusting of sooty mould on the upper surface of leaves of citrus trees may indicate the presence of soft scale on the underside of the leaves above. When you turn the leaf over you are likely to see some scale insects lined up along the main vein of the leaf – clearly phloem sap-feeders. On the other hand, hard scale insects such as red scale may be scattered on leaves, twigs and fruit.

Large bugs which feed on phloem sap, such as crusader bugs and harlequin bugs, are usually quite active and tend not to have honeydew building up around them, so you may not see sooty mould near them. You need to look for other symptoms such as wilting shoots and flower drop. The psyllids on the lemon scented gum described earlier were producing vast amounts of honeydew and are obviously phloem sap-feeders. Psyllids on gum trees may be located on the main vein (midrib) of gum leaves, but also secondary veins. The lemon scented gums I saw in Melbourne had large populations of psyllids but there is probably no need to be concerned. I have written here on several occasions that there are often ‘boom or bust’ cycles to insect infestations. Predators and parasites will most likely bring the psyllid numbers down. I wrote about a similar recovery of lerp-infested trees in my own area titled ‘Recovery from insect attack’ (Pest Files March 2021). To be sure those lemon scented gums in Melbourne do recover, I will be checking on them when MIFGS is on again next year.