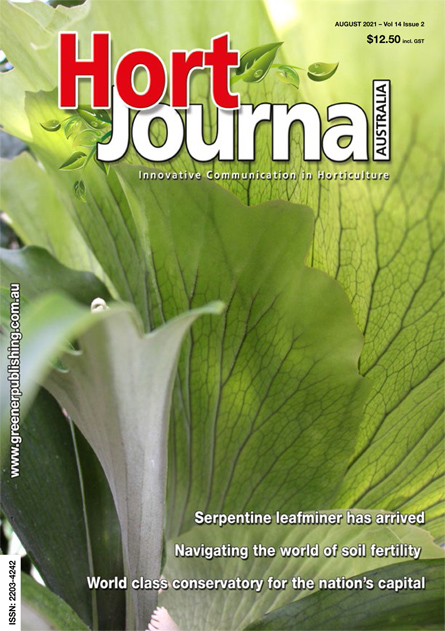 The effect of COVID-19 has been a dampener on public gatherings but to the credit of the Australian Institute of Horticulture (AIH), where there’s a will there’s a way. The usual awards for 2020 were broken into manageable chunks and conducted when and where possible. This resulted in several smaller meetings spread over several states. The last of these awards was recently held at Parkridge, Noosa, and was hosted by Costa Georgiadis. It was also pleasing to see representation from local government in attendance, to witness first-hand the passion that emanates from our industry. Well done AIH!

Recognition for a job well done is an essential element for providing motivation to doing a job well. This recognition will often spur individuals on to go above and beyond in the performance of some task. Sometimes the larger organisation is taken for granted, as we congratulate individuals who have made a significant impact on a project. A project needs a champion before the first hole is dug or the first dollar spent, and this champion could be a committee or bureaucracy. Cairns Regional Council, Noosa council, North Burnett Regional council and the Altum Property Group were among those recognised as contributing to high quality urban and regional green space development at the Noosa awards.

Besides the Queensland projects, over the course of this year the AIH recognised several other green space projects ranging from the Caulfield to Dandenong rail crossings and Burwood Brickworks in Melbourne, to Benjamin Short Grove in Orange, NSW. Organisations receiving these awards ranged from a consortium consisting of Mission Australia, the Royal Botanic Gardens Sydney and Centennial Parklands, to landscape architects such as Aspect Studios and developers such as Frasers Property and Altum Property Group.

Projects that receive awards have a higher community profile, enhancing the value of the project and acting as a seed or model for other developments. Recognition by professional organisations of a well designed and built project, helps to spread the story the project is telling. This is particularly important for projects that involve community space, restoring the environment for all participants. Regional Councils see the value in creating interest in their communities, especially if it means a traveller or tourist might spend more time exploring their region. As Costa pointed out to the audience, several regions in the Eastern States of Australia are capitalising on this idea of community, open space, and value-adding. Regional projects, such as the Gayndah – Burnett Riverwalk, promote awareness and protection of iconic indigenous species such as the Platypus and Queensland Lungfish, while other projects such as the Munro – Martin Parklands in Cairns promote wellbeing of tourists and residents alike.

The Parkridge development in Noosa used a parcel of degraded land, previously used as a sand quarry and later as a landfill site for mixed waste, to develop a resort-style apartment complex incorporating two hectares of greenspace. A locally produced microbial ‘brew’ improved the nutrient-poor sand/soil ensuring the success of the landscape plantings.

It is encouraging to see how well community projects like these are accepted and can find funds in a competitive environment. Industry recognition of excellent projects may make fund raising a little easier for the next generation of projects when they hit the drawing board.