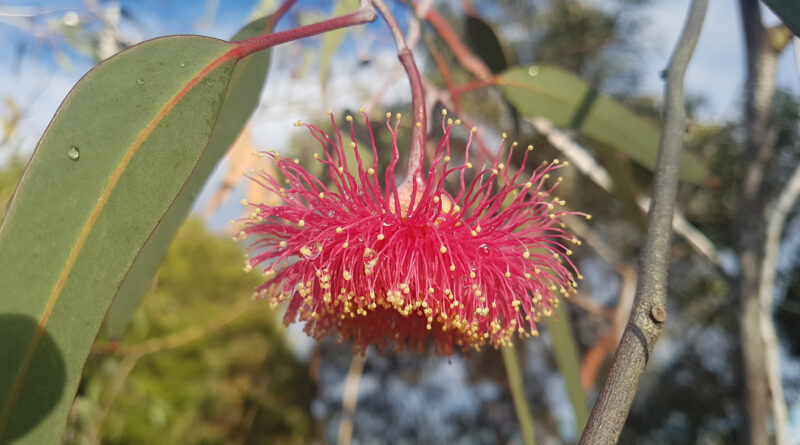 Eucalypts have dominated the Australian landscape for millions of years, and so it is with good reason that on the 23rd of March we celebrated National Eucalypt Day in Australia. To further celebrate this iconic tree, I interviewed four guests representing Eucalypt Australia on my podcast, with a separate episode covering a different topic each week throughout March. Linda Baird, CEO of Eucalypt Australia, joined me in the first episode of the four-part series to provide an introduction to eucalypts. The following is what we discussed.

Eucalypt Australia recognises three separate genera that can all be called “eucalypts” and they are Eucalyptus, Corymbia and Angophora.

The easiest way to identify a eucalypt out in the world is to look for the operculum, or bud cap, which is the fused sepals and petals which fall off as the flower blooms, although the small-numbered Angophora genus is the exception, where mature flowers have attached petals and sepals. Eucalypts gain their name in Greek from this operculum, which refers to how the buds are “well covered”.

The most vibrant part of a eucalypt flower is usually the fluffy stamens, which are the male reproductive organs of the plant. When eucalypt flowers are pollinated, the fruit formed is the famous gum nut, and they can be every bit as ornamental as the flowers themselves.

The variety of beautiful bark textures, leaf colours and branch structures are three more reasons people love to plant eucalypts in their gardens.

Many, but not all, specimens benefit from fire when spreading seeds for a couple of reasons. Firstly, fire clears the landscape so the seedlings can have an advantage on the bare soil without competing with leaf litter and plants. Secondly, fire can encourage the plants to drop seeds from the seed bank held in their canopy.

It’s important to note that fire does not benefit all eucalypts, and can be an incredibly damaging force in areas that have not historically been associated with regular bushfires. Linda quoted an article written by fellow “gum nut” Dr Dean Nicolle, who stated that 90% of eucalypts resprout after fire, but there are 85 species that only regenerate naturally through new plants growing from seed.

Eucalypt habit can vary from massive single-stemmed trees to smaller multi-stemmed mallees, which emerge from an underground stem called a lignotuber. The mallees are generally much more resilient to fire and coppicing because they have adapted to re-emerge from the soil after damage.

Eucalypts provide a food source and habitat for countless Australian fauna, with bountiful nectar and pollen in their flowers, and hollows in older trees. Some animals such as koalas have even adapted to eat their nutritionally poor leaves.

Just like with all plants, it’s important to plant the right eucalypt in the right place. Some eucalypts, such as E. camaldulensis, the river red gum, are known to drop heavy limbs, so it might be a bad choice to plant next to your driveway. But there are plenty of others that would be more suitable for such a space, including E. caesia ‘Silver Princess’, which has a smaller habit and won’t do as much damage if it drops a limb or two.

Match the eucalypt species with the environment you will be planting into. You can successfully plant a eucalypt out of its natural region, as long as you take into account the cultural conditions that will affect it for the next few decades or centuries, such as the soil type and climate. Grafted trees can allow plants to grow in otherwise unsuitable conditions for certain species, such as Corymbia ficifolia in Melbourne and Sydney.

Planting varieties that would naturally grow further north than where you are planting is a smart move, because as the effects of climate changeincrease, our plants will have to deal with hotter conditions. I hope you will listen to the four-part eucalypt series on the Plants Grow Here podcast, and reach out to commend the organisation on social media because they are doing fantastic work increasing public awareness around eucalypts. Maybe one day we can break the stereotype of eucalypts being “widow makers” so they will not be indiscriminately removed from public spaces.