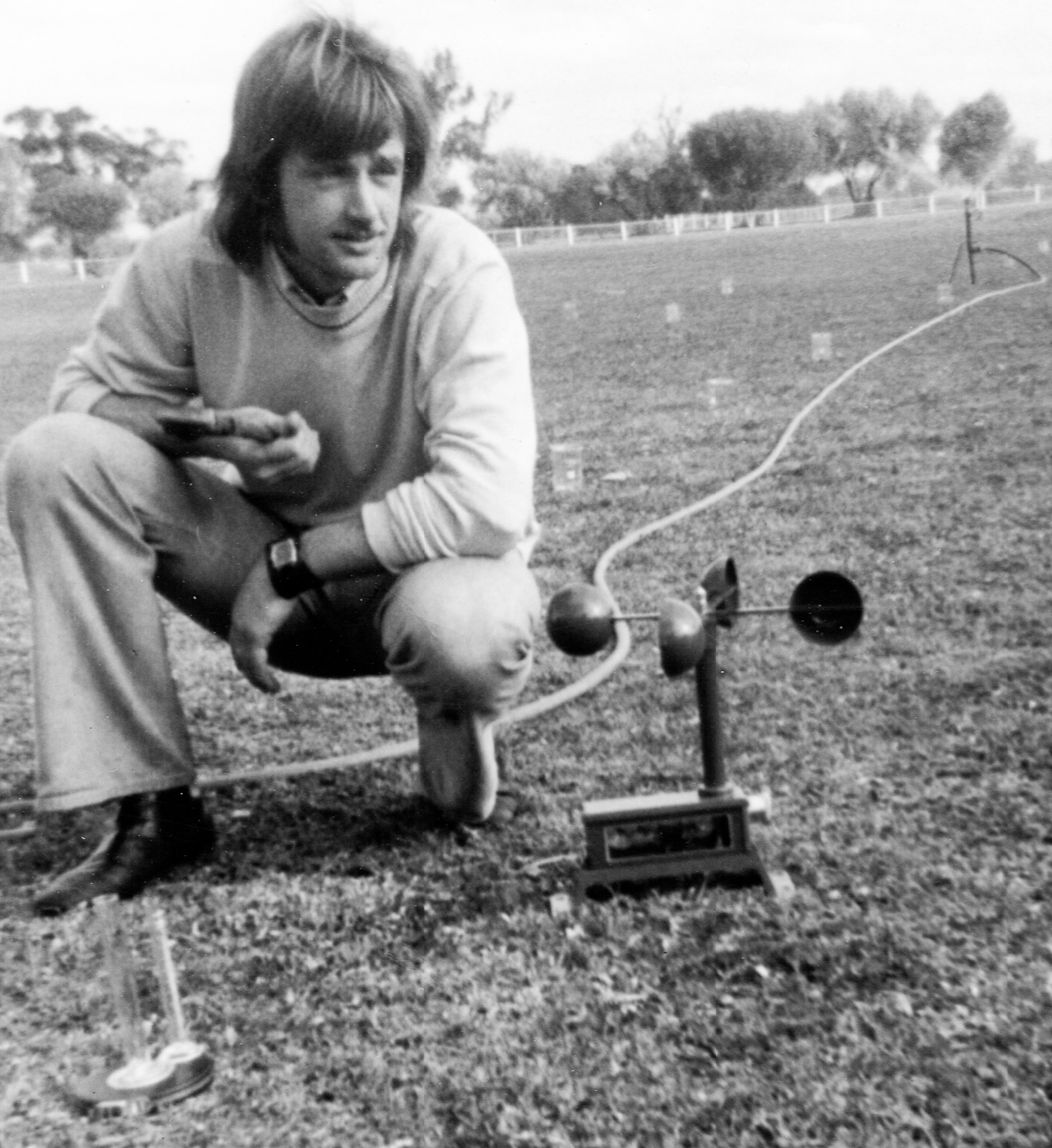 What is horticulture versus agriculture say, or gardening? What is education – learning, imparting skills, absorbing knowledge, becoming scientific? The answers to such questions rest largely on who and what you are, and the time and place in history at the point of asking. Now is certainly an opportune time for the industry to reconsider its priorities, options and directions.

At this moment, in Australia, horticultural education could be described as at an historical low-to-mid point in terms of entrant and graduate numbers, study options and investment.

It can be argued that horticulture was once its own identifiable and valuable paddock, but that it’s now a minor corner of a much bigger ‘environmental’ paddock, requiring extremely diverse multi-disciplinary knowledge and skills.

By extension, if the greenlife industry persists in seeing itself in traditional, narrow, limited dimensions it will become increasingly isolated from the main game, and even less in control of its long-term fate. We are at an historical point of intense change and some adaptability is essential.

Associate Professor John Rayner, Director of Urban Horticulture at Burnley Campus (University of Melbourne), says horticulture has always been a field where new entrants have come from different backgrounds and pathways, then enter an industry that is diverse and complex with many sectors.

Transferable knowledge and skills, and lifelong learning should be at the cornerstone of any framework for an industry that wants to grow and develop.

Agriculture and horticulture have always been closely linked and for many centuries, learning or study in these areas, on the plant side at least, was closely related. It was the species, the scale and the applications that differed.

In Victoria, sites like Dookie Agricultural College were founded as research stations in the late 1800s at a time when governments saw their role as necessary supporters of a more efficient agricultural sector.

Burnley Horticultural College began earlier than that, succeeding a garden and school more involved with gardening and improving the floral skills of genteel young ladies. Following two World Wars, both sites (and others) were used to re-skill returned soldiers in agriculture or horticulture before their allocation to ‘soldier settler’ blocks, their return to family farms or entering the horticultural workforce.

By the 1970s, the likes of Dookie, Burnley, Longerenong etc., were under the umbrella of the state’s Department of Agriculture and their graduates, technically at least, were regarded highly as practical and versatile practitioners, and good generalists.

This was largely due to a diverse and intense lecture program, plus practical lessons, over three years. Lectures ran from 8.30am to 5.00 or 6.00pm, five days a week at least, often including Saturday mornings, and up to 40 separate exams twice a year. Graduates were awarded a Diploma of Horticultural or Agricultural Science.

The Department of Agriculture always ran the colleges up until the VCAH was formed in 1983.

“Graduates of the Diploma of Horticultural Science and its predecessor, Diploma of Horticulture, left Burnley with a broad education in horticulture and allied fields which equipped them with basic skills and a pretty good idea of the area of specialty in which each intended to pursue a career – a ‘jack of all trades, master of none’ qualification,” commented horticultural journalist and adviser, Noelle Weatherley AOM.

John Rayner suggests this is why students would not enrol in the 1970s and 1980s courses as there were no jobs for these graduates but says “those days are over”.

Annual intakes at Dookie and Burnley through this period were usually around 50-100 students. First-year attrition due to unsuitable course choice, workloads or other challenges could be high.

Naturally, some of the (relatively few) universities offered Bachelor Degrees in Agricultural Science, taking suitably longer study timeframes and higher-level knowledge. The Bachelor of Applied Science (Horticulture) at Burnley was the first Degree program offered in the VCAH.

From the late 1970s-on, other forces, political, philosophical, economic, social, started to bring more frequent changes. The ‘old’ league of colleges was seen as too small for Federal funding individually, so the collective VCAH (Victorian College of Agriculture and Horticulture) came into being in 1983. Ultimately, this arrangement was also seen as inefficient, and these longstanding sites and facilities were absorbed into the fold of universities and others (e.g. Dookie and Burnley became campuses of the University of Melbourne). Similar changes occurred in other states.

Course options also went through an associated period of massive change. Certificates, Degrees, Graduate Diplomas, Associate Diplomas provided options. A ‘second tier’ of universities emerged, many in regional areas and many off the foundations of the old technical colleges. Generalists gave way to specialists and more focused study and skill areas gained sway. Governments retreated from training in lieu of directing funding.

In the early 1990s qualifications issued by non-government colleges and approved training organisations were recognised, and even more choices were made available to post-secondary students. Some were very ‘niche’ and skills-focused.

Amenity horticulture was promoted as a growing sector, associated with widely accessible training which also, coincidentally, took thousands off the unemployment rolls. Every few years the system was re-invented over a foundation of places established in different times for a different purpose. Some had outlived their usefulness, suffering from little capital investment and tight operating budgets.

The political and funding focus moved on to place higher values on ‘skills’ training as opposed to science, development of thought processes, innovation or adaptability.

Some study and training options were a response to student demand, especially those who didn’t want generalist courses.

More recently, the education landscape was completely re-modelled again with the boom in full-fee paying international students, which became an industry itself, and online courses (Covid 19 notwithstanding).

“All our programs at Burnley, the Graduate Certificates and Master of Urban Horticulture, have grown in enrolments over the last two years, despite the drop in international enrolments across Australia. These are demand-driven enrolments, students with previous qualifications making a conscious decision to enrol in a course which provides employment in an expanding industry, in urban forests, landscape management, horticulture, green infrastructure and more,” John Rayner said.

So, what does the Australian greenlife sector want, or need, today? John Rayner comments, “Increasingly, employers need high-level problem-solving, communications and technical skills in a specific area to help manage horticultural assets, whether that is plants, gardens, parks or trees.”

It is generally agreed that employers at the enterprise level want intelligent, hardworking problem-solvers that will work for the (minimum wage-based) pay available. One figure said, “that is a small pool” of candidates.

That ‘small pool’ is reflected in the relatively low number of people seeking training, education and employment in horticulture. It is also reflected in the less than historic numbers of courses and options on offer (John Rayner’s recent experience at Burnley notwithstanding). A lack of demand also ultimately leads to less commitment by organisations and (more transient) teaching staff and lower investment in facilities and infrastructure for horticultural training. Of course, there will be positive exceptions.

Former veteran Burnley lecturer, Peter May comments simply, “I’m told that good horticultural people are hard to find. Part of the reason is that we’re simply not training enough. At its peak from about the late 1980s through to the mid-1990s, there would have been 200-250 students (Certificate, 2 year Associate Diploma, Graduate Diploma and 3 Year Degree) at Burnley at any one time. Now there might be 20 or 30 graduates annually”.

It is understood the trends at the TAFE colleges are similar.

John Rayner has observed “internationally there is a similar trend in undergraduate and TAFE enrolments. Demand has collapsed, but there is growth in graduate courses and professional development programs”.

TER entry levels at the University of Melbourne’s agriculture and horticulture programs fell through the mid-1990s. While this was a response to a lack of student demand, it also tended to erode the perceived value of the courses offered, a downward spiral, however, opinions differ.

“The lack of attracting high quality candidates to study horticulture also relates to a lack of career pathways and poor wages in many parts of the greenlife industries. Students will be attracted to areas where those opportunities exist”, John Rayner commented.

“This is a topic the industry doesn’t want to talk about,” he challenged.

Noelle Weatherly says, “From an industry point of view, in my opinion, degrees and post graduate diplomas turn out over-qualified applicants for basic horticultural jobs. Those with these qualifications generally expect salaries appropriate to the level of their education, which is much higher than the overall industry standard for someone with no ‘on the job’ experience.

While they have a good theoretical background, they have minimal practical experience to bring to an employer. Most also expect an academic or scientific position rather than a hands-on horticulture position. There is a gap between graduate/post graduate standard and the Cert III/Apprenticeship level, which isn’t really being addressed in my opinion. It’s either university or TAFE. No middle ground.”

John Rayner says, “Many of those with degrees don’t want basic horticultural jobs and will be unsuitable for most of them anyway but there are many technical, supervisory or managerial positions that warrant degree-level education and skills.”

Falling numbers are something of a global trend according to the website of ACS Distance Learning, which started life as Australian Horticultural Correspondence Schools. ACS was established by John Mason, a graduate of Burnley Horticultural College. In the late 1980s, he saw the numbers of applicants being turned away each year due to insufficient places available for the number of people wanting to study horticulture. So, distance education courses were developed.

Government changes in 1992 saw ACS and others granted Registered Training Organisation (RTO) status. By the late 1990s, most of the courses offered had some form of formal accreditation but the bureaucracy and costs involved with accreditation were escalating.

John Mason says we are now going through a period of “great adaptation and change”. He refers to “massive change … turmoil … disruption and loss of direction”.

“But, there is not less activity or money (involved), it’s just in different places now.” Since universities were first established more than 800 years ago, through the more recent development of vocational education, he says “the machine has grown complex and rigid over the centuries”.

“If there are voids left, they will be filled (by others).” John points to the emerging use of online modules and webinars by professional and industry organisations to maintain member accreditations as representative of the changes.

Learning is no less important but there is a growing demand for ‘micro-credentials’ in almost any field, and “it is about what you study not where you study”, he observed. His experience and observation is that 10 years ago, ‘qualifications’ were Number One on an employer’s list, whereas they might now be No. 5. He quotes a leading greenlife industry figure who regards his top three needs as “attitude, attitude and attitude”.

With its global distance learning and licenced affiliates business model, ACS now claims more than 3000 students enrolled in more than 100 countries, and a further 10,000-plus studying through affiliated colleges who license and use the courses it develops and maintains.

Nevertheless, they have observed, “Courses and qualifications in horticulture are shrinking! Educational institutions world-wide are narrowing their course base, lowering course content, absorbing horticulture into other, often non-related, departments and offering their students far less in the process. The rationale for this shrinkage is that there is less demand from students for places (because in general) students are not seeing a great future in horticulture.