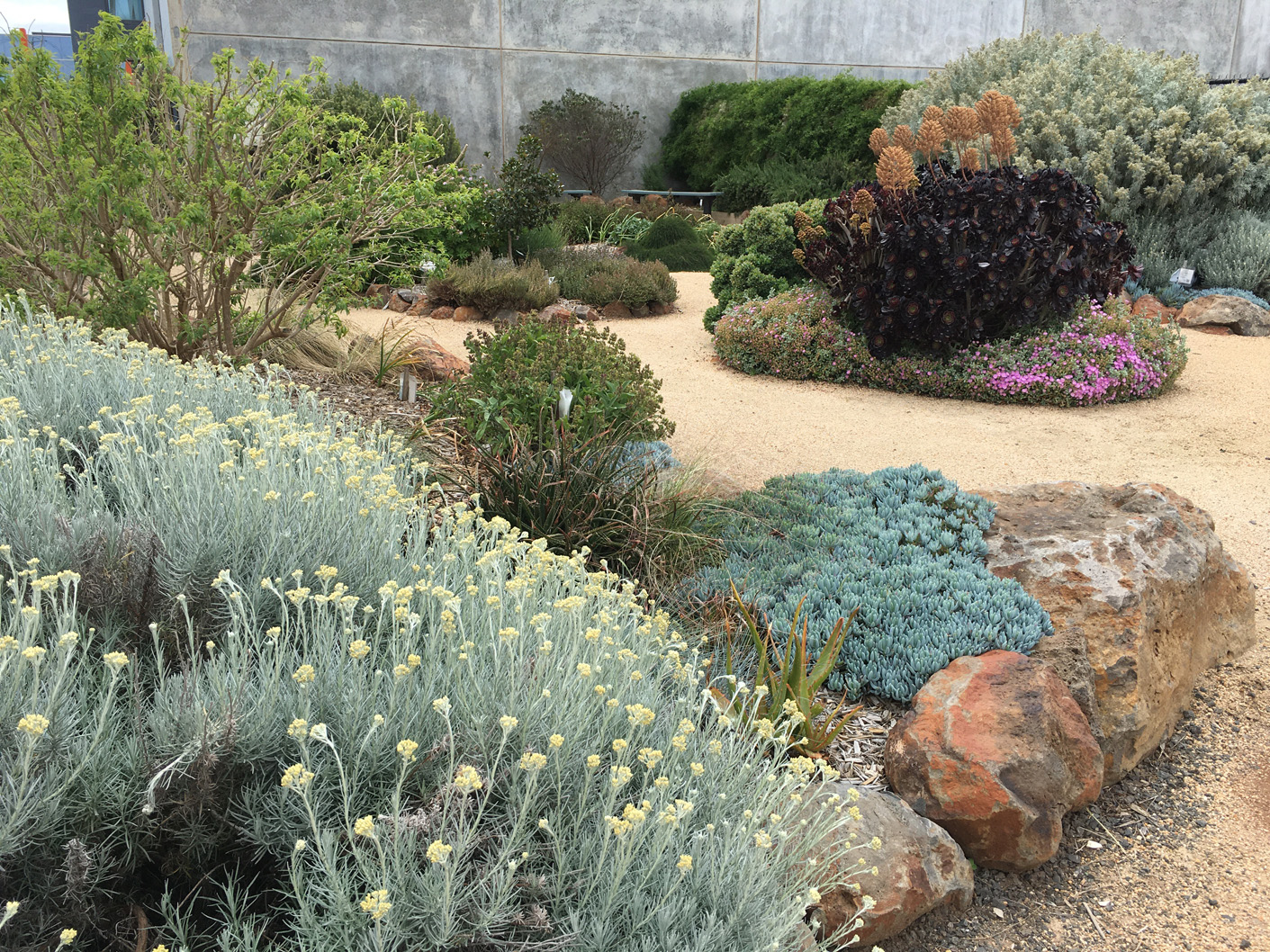 The Melton Botanic Garden (MBG) has been booming and blooming thanks to a large team of volunteers from the Friends of the Melton Botanic Garden (FMBG), who are responsible for developing and maintaining the gardens with some support from Council. The garden was officially named in 2011 and is one of the newer regional botanic gardens in Victoria.

The 26ha garden attracts visitors from interstate and overseas. The garden has an outstanding Dryland Eucalyptus Arboretum, holding over 100 species of dryland eucalypts as a nationally registered collection with Plant Trust.

The overall theme is dryland, with most plants representing regions with annual rainfall around or below 450mm, or that can tolerate dry conditions once established.

The dryland theme is reflected in all the themed garden areas: Southern African, Mediterranean, Californian, Central and South American, Western and South Australian, Dryland Eucalyptus Arboretum, Eastern Australian Dryland, Bushfoods, Indigenous Peoples Garden, various indigenous plantings and Victorian Volcanic Plains Garden. In the north section of the garden is a mixed garden area which is like a mini-Melton Botanic Garden, with beds representing all the major themed areas. There is a 1km Lake Walk around the main lake where visitors see local indigenous plants and birdlife.

Throughout the year there are always plants in flower. You will always find some eucalypts in flower whichever month you visit. The most prolific time for flowers is in late winter and spring. From April many of the succulents are spectacular, especially the Aloes in the Sothern African Garden.

The Southern African Garden boasts an impressive display of Proteaceae as well as holding about 16 of the 26 Southern African salvia species. The Erica Bed is very colourful in winter and early spring.

The Mediterranean Garden displays plants representative of the Mediterranean Basin. There are seven oak species, and though still small, they will be a wonderful legacy for future generations. The Olive Grove has 14 forms of Olea europaea. The Mediterranean perennial bed is in full bloom late spring and early summer. There are many species of edibles including figs, pomegranate, carob trees, caper, and crab apples.

The Bushfoods Garden philosophy is based around Aboriginal and contemporary uses with over 70 edible native plant species.

The Western Australian-South Australian Garden beds represent some of the bioregions from WA/SA similar to Melton in climate. This was the second major development project commencing in 2014. This garden, occupying a hectare, was developed in three stages. The first stage was a display bed featuring paper daisies and beds representing the Geraldton Sandplains, Esperance Plains and Avon Wheatbelt bioregions. These beds are raised and mulched with a coarse red sand. Over the following two years the remaining Western Australian and South Australian were developed and planted. We are now revamping and refreshing some of these beds. The display bed is an eye candy of wildflowers from August to November.  The South Australian beds have an Eyre Yorke Block bioregion and an inland South Australian bed. Particularly the Correa pulchella in these beds are stunning when in flower through winter.

The Friends are continuing to enhance the plant collections and garden features.  We continue to document the collections in the botanical database IrisBG. We will be adding further plant and interpretive signage to enhance the visitor experience.  Only 10 percent of the garden remains to be developed which will incorporate the main arrival area and a Botanic Garden Centre.  The garden should be a “must visit” on your next trip to Melbourne.