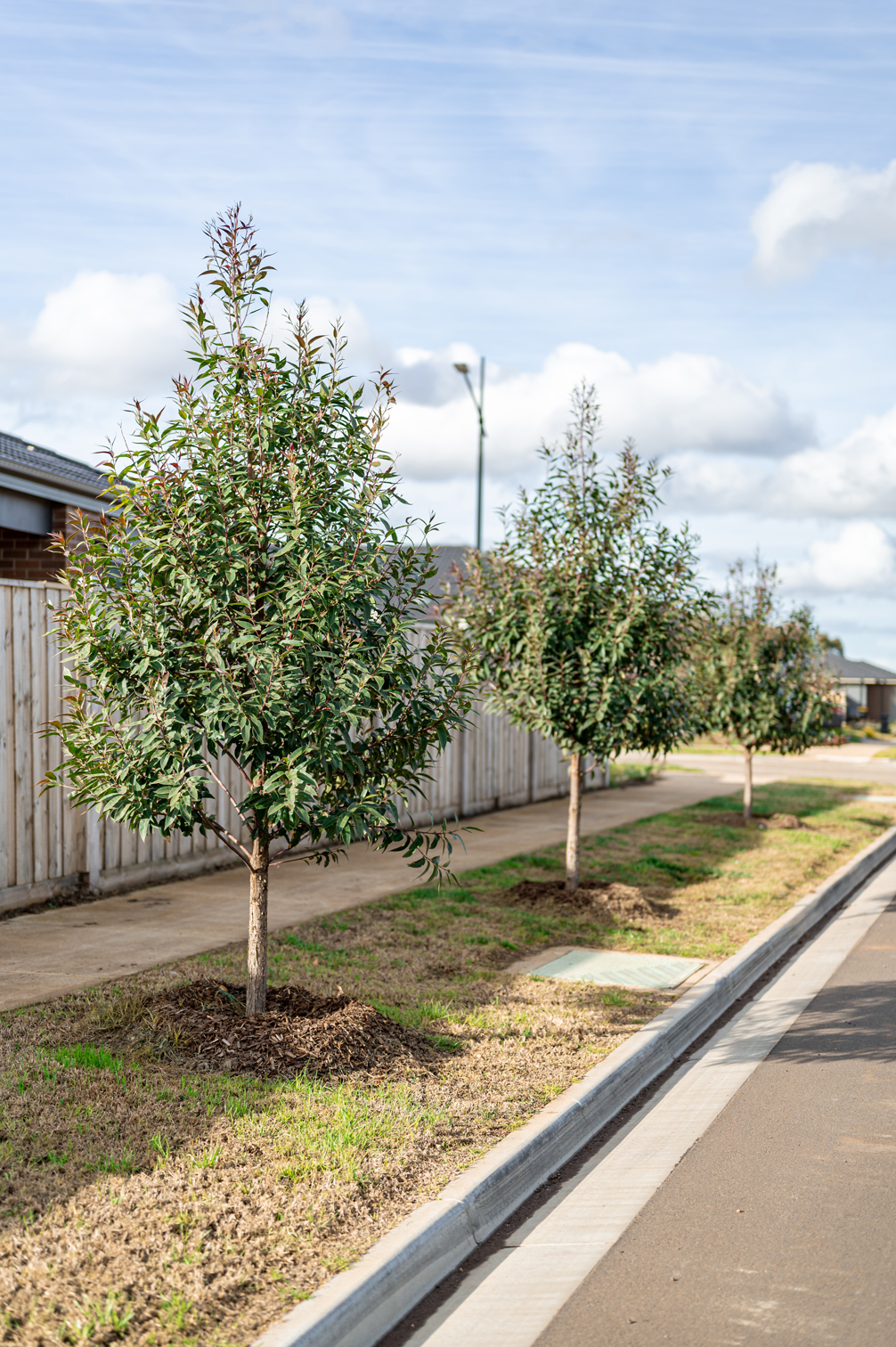 Many industries now utilise fast-track design and manufacturing methods to more quickly deliver products that meet customer demands and expectations in a rapidly changing world. However, in the greenlife world, especially in the advanced tree sector, participants must, by definition, play a ‘long game’. Innovation, nevertheless, continues apace.

While progress can be relatively slow, advances are still made, and every facet of the tree grower’s business is continually honed to deliver business advantages and customer benefits.

The advanced tree market is heavily focused on two key sectors of demand, the public sector needing greenlife for streetscapes and recreation or amenity areas, and the commercial landscaping sector seeking instant effect in private and public projects. Who has a reliable crystal ball for what either of these sectors will demand in five, seven, or ten years?

However, certain drivers are well to the fore in the minds of our advanced tree growers, especially a changing climate. The practical, and less obviously tangible, benefits of advanced trees are now backed up by a fast-growing body of scientific research – climatic mitigation, energy saving, plus human productivity and wellbeing benefits.

Leanne Gillies, Fleming’s head of Research and Innovation, observed, “There’s a few things going on at the moment. There’s an increased awareness of tree quality. I think there’s a shift toward larger canopy trees, with a focus on larger canopy cover and a recognition of all the benefits that come with that. And there’s a lot more discussion happening around future climate.” Metro Trees’ John Fitzgibbon mirrors those observations, pointing to their website that states, “Planning for climate change will require that one attempts to think about the conditions that a newly planted tree will be potentially facing in 30 or 40 years, as it reaches its maturity.”

The company has been modifying its stock lists for several years to reflect the changing world. “In particular, species with poor drought or heat tolerance are no longer part of our production plan.”

The site also declares “passion and dedication” to tree quality through the Australian Nursery Standard AS2303:2018.

Change over time is obviously a major consideration for both companies.

and Corymbia maculata ‘Gamai’, both specifically identified for their suitability for urban forest plantings, including streetscapes, parks and gardens, according to Flemings.

Each of these new releases are clonally produced, ensuring consistency and uniformity in the landscape. Flemings points out that clonal propagation has long been used for deciduous and fruiting trees but has proven challenging with native trees.

“There are several methods traditionally used for clonal propagation, including cuttings, and budding or grafting. Many Australian native tree species, including Eucalyptus and Corymbia have very poor strike rates from cuttings, meaning they are not commercially viable.

“Until relatively recently, all Australian native trees have been grown from seed. These seed-grown trees have enormous genetic variation. This variation applies to every aspect of the tree’s growth, form, features and tolerances. Seedling-grown trees result in unpredictable long-term results and require more expensive management methods in the landscape.

Flemings say over the last 10-15 years, there has been some commercialisation of native trees grafted onto a rootstock.

“This process has unfortunately generated variable results and identified some issues including suckering of the rootstock, and delayed graft incompatibility resulting in the tree breaking at the graft union. The selection of the rootstock has also introduced variability in the performance of the trees in the landscape. This has included uneven growth rates, variation in the environmental tolerance of the tree and inconsistent plantings.

Their new releases have been produced via tissue culture, a process that offers several advantages. All trees have the same genetic make-up, so will be consistent both in production and in the landscape. The trees are all on their own roots, so there is no chance of incompatible grafts or rootstock suckering. Additionally, the tissue process enables year-round production and offers greater reliability of supply.

The development of these trees began when selections of superior forms were made back in the early 2000s. Since then, various propagation and growing trials have been conducted to ensure that the trees perform as expected. Some trial plantings of these new cultivars have also been made in various locations around Victoria, allowing observations of in-situ performance. During this process, some selections were deleted as they did not meet Fleming’s performance requirements.

The need for tissue culture production was identified very early in the process. After nearly a decade of work and many trials, the procedure has now been refined and trees can be reliably produced.

Fleming’s two new releases are claimed as the first ‘own root’ Eucalyptus and Corymbia cultivars available in Australia.

(Matong is an aboriginal word meaning strong) This cultivar is described as producing a good central leader with excellent calliper and is naturally self-supporting. The new growth emerges a deep bronze colour and matures to a deep green. For an Australian native tree, the shape is quite formal. This cultivar is denser and more compact than is typical for the species. Trial plantings have demonstrated good tolerance to dry conditions, windy sites and poor soils. This selection is an excellent choice for consideration in street tree plantings, avenues, and parks and gardens.

(Gamai is an aboriginal word for spear) This is an upright-growing cultivar of Corymbia maculata. Typically, Corymbia ‘Gamai’ is suitable for planting in urban situations with poor soils, dry conditions and pollution. The key feature of this cultivar is its upright form, which offers shade, without impeding pedestrian or vehicle access. Consider this cultivar for streets, boulevards and avenue plantings where lateral space is limited.

In the face of current climate trends, identifying suitable candidates for future plant lists can begin with climate modelling to develop ‘habitat analogues’ which can be used to select appropriate plants for various climate projections. Researchers can play with temperature, rainfall and time as variables, to see what the climate in a city might look like in 10, 30 and 70 years time. Using selected variables, a list of ‘homoclimes’ can be identified elsewhere in the world.

Their development program saw Cupressocyparis leylandii ‘Madeline’PBR introduced late last year. This Cypress is a much improved and robust version of the long-running ‘Leighton’s Green’, boasting 30% quicker growth rate of height and breadth, and faster in-ground establishment. It exhibits a more feathered foliar texture suited to a defined ‘crisp’ hedge line, or it can be allowed to freely form.

John says that Madeline’s faster growth rates may be associated with a more disease resistant physiology, however this has yet to be clarified and validated.

A new upright Ficus that will take more heat and require less pruning, a potential poplar replacement suitable for street, park, avenue plantings and screening, is scheduled for release late 2021.

At present, they also report good demand for Melia azedarach ‘Elite’ PBR, a non-fruiting White Cedar they have offered for some years. It has a combination of appealing attributes for an urban tree such as form, canopy, drought tolerance but crucially, no fruit to compromise the other advantages.

“It’s a rainforest tree that seems to grow in a range of climates, and provides good shade. It’s not a huge tree, 8m x 8m, with an umbrella-type canopy. Propagated originally from a Melbourne suburban source and a sterile type, it doesn’t form proper flowers, so it doesn’t produce the fruit which can be problematic for pedestrians, and pets that have been known to ingest them.” Working out from experiences of the ‘Millennium Drought’, John said they are “working to the narrative of climate change … and certainly not growing non-survivors”.