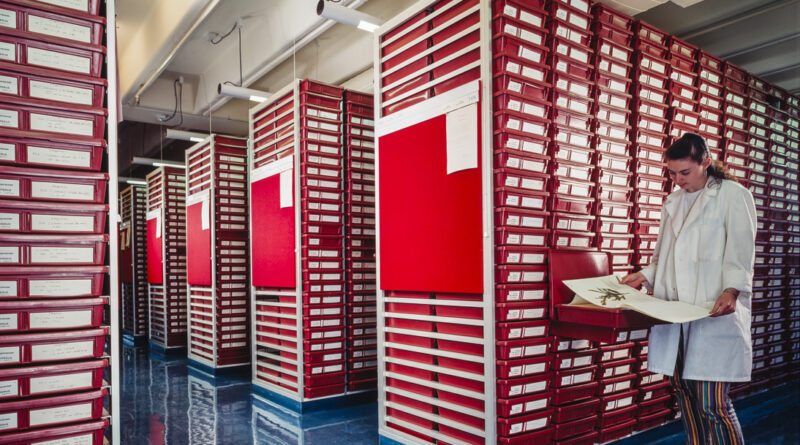 Over one million plant specimens valued at $280 million have now moved to the National Herbarium of NSW at Mount Annan Botanical Gardens after almost 170 years at the Royal Botanic Garden, Sydney.

Recent extreme weather events have really focused attention on how frail the environment has become. Since European colonisation, according to the Threatened Species Recovery Hub, it is estimated that at least twelve Australian plants have become extinct and another 206 are critically endangered nationally. Thirty of these species have less than fifty mature individuals left in the wild. Since 90% of Australia’s plants are found nowhere else, total loss could be a disaster.

Australian Botanic Gardens are a reservoir of genetic diversity that could help reverse losses and provide scientists with the support to help us find our way back to healthy environments. The new state of the art science facility at Mount Annan near Sydney, NSW will provide facilities for nearly 100 scientists undertaking research for the Australian Institute of Botanical Science. A senior research scientist at the herbarium highlighted the importance of this work. He was trying to describe a plant unknown to science, that is, a plant with no name, and classify it within the 25,000 flowering plants found in Australia. This particular plant is now rare and may have a range of about ten square kilometres. Sequencing of the plant genome can be undertaken in-house allowing comparison of this unknown to an existing database. Without research of this type, we do not know what we have and will not know what economic opportunity we may have lost.

The Australian Institute of Botanical Science consists of the physical and virtual scientific collections, research, services and staff of the Royal Botanic Garden Sydney, Australian Botanic Garden Mount Annan and the Blue Mountains Botanic Gardens Mount Tomah. The institute is one of the nation’s premier botanical research organisations helping to ensure the survival of plants and build a more resilient ecosystem for future generations.

Designed by Australian architecture and design studio Architectus, the facility’s functional and sustainable design is inspired by the waratah seed pod of New South Wales’s floral emblem. Construction of the brand-new Herbarium was supported by a $60 million investment from the NSW State Government in 2018, helping bring the innovative project to life. The new herbarium will safeguard the plant collection, having historical specimens collected in 1770 by Joseph Banks and Daniel Solander, and growing by up to ten thousand specimens each year. These specimens are carefully barcoded and placed in one of six protective vaults with precisely controlled environmental conditions. Having specimens collected over a long time span, allows scientists and botanists to compare the samples and detect any changes that may have taken place due to changing conditions.

As part of the monumental move to the new facility, the largest herbarium imaging project in the Southern Hemisphere took place. About 1.4 million samples were scanned during the process. Capturing each specimen as a high-resolution digital image creates a new tech-enabled era of management helping to reduce the physical handling of the fragile specimens. Having high resolution images provides unlimited access to the public and scientists across the globe, allowing faster and more extensive research outcomes. While high resolution images may not be ideal in all cases, it improves access for most projects by removing the wait for a sample to become available.

The design of the new building has an “openness” where visitors can observe researchers and scientists at work. This feature could inspire young people or school students to involve themselves in science or even become a volunteer at the gardens. Seeing a scientist investigating some aspect of plant life could be the catalyst to inspire a young student to find out “what’s going on”.

The National Herbarium of New South Wales also houses the seed bank. The seed vault will store samples of seed from many of the 25,000 plant species occurring in Australia. One branch of the research conducted at Mount Annan is aimed at finding ways to store Australia’s vast range of seeds. Seeds taken from the environment are quarantined, cleaned and tested for viability in the new laboratories. Some seeds can be freeze-dried and stored in refrigerated vaults at -20⁰C, while other seed types, typically rainforest seeds, do not respond to freezing very well. Researchers are trying cryogenic methods, that is freezing seeds at -190⁰C using liquid nitrogen, to extend the storage time for these seeds. Seed from endangered species takes priority. Some seed has been returned to help re-establish some areas affected by recent fires on the NSW coast.

The brand-new facility will ensure the preservation of one of the most significant and precious botanical resources in the Southern Hemisphere and will lead the way into the future of Australia’s plant science and research. I suggest a visit to Mount Annan, and a tour of the National Herbarium of NSW is a must. The botanical gardens cover 416 hectares, and is a popular picnic and recreation area for Sydney residents.