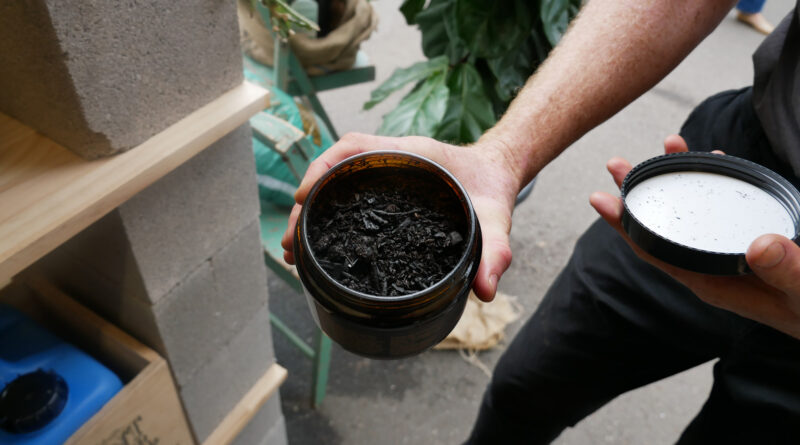 Native to South America but naturalised in most parts of the world, Black Soldier Flies (Hermetia illucens) are being used in Australia to convert food waste into stockfeed and fertiliser.

Commonly sighted around compost bins and worm farms, unlike houseflies (Musca domestica) black soldier flies do not have a mouth-piece meaning they don’t bite and can’t transmit diseases so there’s no health risk posed to humans.

In the Black Soldier Fly (BSF) world, it’s the larvae (maggot) that converts the food waste into useable fats and proteins which makes them attractive for farming. The maggots offer circularity as a poultry and fish stockfeed once they have increased in size. Their frass (faeces) which has no smell is harvested as a fertiliser that is suitable for leafy vegetables and edible crops. Biochemicals can also be extracted from the maggots for the pharmaceutical and cosmetics industry.

As a human food source, the University of Queensland’s Professor Louw Hoffman found that the protein of BSF larvae is higher in zinc and iron than lean meat and higher in calcium than milk.

The United Nations Food and Agriculture Organisation has estimated that 2 billion people globally eat insects as part of their diet.

Half a hectare of BSF larvae is able to produce more protein than cattle grazing on 1200ha or 52ha of soybeans.

BSF therefore offers considerable promise as a means of reducing methane emissions. As food waste makes up approximately 25% of landfill sites, this partners well with reducing landfill carbon emissions as methane, which is approximately 4% of Australia’s CO² emissions.

BSF larvae, unlike composting worms, can eat fish frames and meat which compost worms will avoid. The larvae can eat up to four times their body weight per day.  Each soldier fly lays between 100 and 500 eggs.

Commercially, BSF Rearing Units have been operational in Singapore and Indonesia for over a decade. They are most successful in the sub-tropics and tropics.

The BSF lifecycle process commences with adult flies mating in cloth mesh net cages with the eggs falling onto timber slats below. The slats are then removed and placed over tubs which the hatchlings fall into. The adult flies live for less than a week with the larval engorging of food waste commencing within five days of hatching.

For farmers of the larvae who breed them for commercial sale, the young larvae are fed a mix of chicken feed and water for 2.5 weeks before they transform and become prepupae before pupating and preparing for metamorphosis. The trays of pupae are placed into dark cages to undergo metamorphosis, emerging as black soldier flies.

Karma3 in Melbourne, who farm BSF larvae, found that adding alcohol to the food being eaten increased the protein yield by 10%. Karma3 have ambitions of processing 500,000 tonnes of food waste annually with their soldier fly farms. The BSF larval meal (BSFLM) has been added to pelletised poultry feed but it cannot be fed to pigs because it is classified as swill meaning the insects have come into contact with meat and it poses a risk for foot-and-mouth disease and African Swine Fever.

BSF farming offers potential for mixed agriculture producers to manage their waste on site as well as potential for councils across Australia to manage FOGO (Food Organics Garden Organics) waste, with the food waste being managed separately to garden waste.

In the Mackay region, Auscan Worm Farm in Mackay is experimenting with BSF larvae in a dual composting worm and BSF larvae operation. Auscan takes fruit and vegies from local Coles and Woolworths stores with the BSF larvae converting the food waste into fats and proteins. It is re-packaged as compost and sold back to local businesses and community members.

The Commonwealth Government’s National Waste Policy Action Plan requires that the states and territories agree to the following:

Not all local government areas in Australia will have a population that makes viable green energy facilities, due to the amount of food waste required as fuel, as a means of meeting the National Waste Policy Action Plan objectives.

Subsequently, it’s likely that more councils around Australia will soon be trialling Black Soldier flies to assess their viability as a food waste reduction means, offering circularity at a local level.