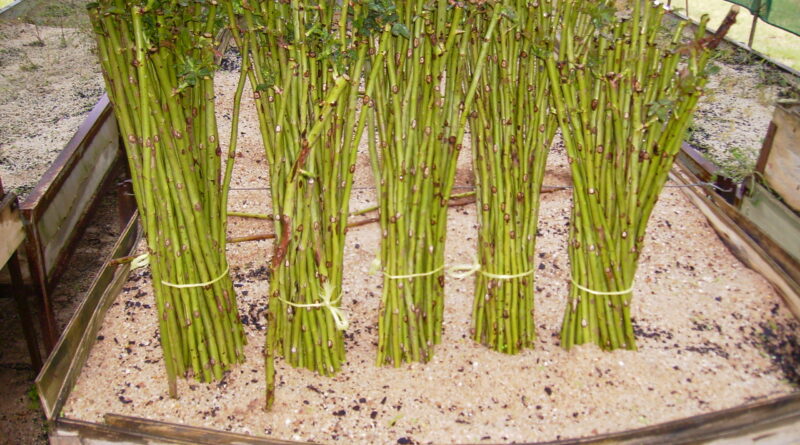 In simple terms, propagation is the multiplication of plants, but just like the vocation of horticulture itself, the subject offers a field of lifelong learning and a range of niche opportunities.

To be a good propagator, a person not only needs to develop a knowledge base of plant physiology and science, but also to hone a range of physical techniques used in the art of plant multiplication. When put like that, plant propagation can sound somewhat daunting, but it is also a lot of fun and the feeling of seeing your first successful graft, or germinating that notoriously difficult seed, is hard to beat.

For production nurseries though, propagation goes well beyond fun, and the skill of producing big plant numbers (all going well) translates to big profits and successful businesses. Many propagation nurseries utilise vegetative cuttings as their preferred propagation method. Sections of stem, from the tips to the hardwood, can be used to duplicate exponential clones of desirable parent plants. Using these techniques requires relatively little space for stock plants and is useful for a wide range of species. For some species, particularly cultivars, it is the only way to reproduce the parent plants.

The reverse is true for other species which are difficult or will not strike from cuttings, and instead need to be propagated by seed (a trait displayed in several eucalypts and acacias). Seed propagation is also a valuable option to produce large numbers of plants quickly, with, in most cases, little space devoted to stock plants. However, unlike vegetative propagation, which produces genetic clones of parent plants, seed will always display some genetic variation, even from plants that have self-fertilised.

While many seeds will germinate without much bother, some have inbuilt dormancy mechanisms that will limit the species’ germination until the seed has gone through specific environmental conditions. With these seeds, propagators must get clever, and find ways of getting around the seeds’ dormancy. Hot water soaking, smoke treatment, scarification (mechanical weakening of seed coats) and stratification (cold treatments) are all common ways to break seed dormancy but there are many others suited to a variety of species.

Another technique favoured by the big players in the nursery industry is tissue culture. This is more energy intensive, and technology driven, than other techniques but results in more numbers in a far smaller space than any other technique by a long way. Tissue culture is often thought of as multiplying minute sections of tissue from the growth points of plants, but seed embryos, callus tissue and even pollen can also be cultured. The plant material is generally set in an agar medium and encouraged to multiply using artificially introduced plant hormones, including auxins and cytokinins. In addition to the large numbers of plants made possible through tissue culture, the plants are free of soil, and as such, can often safely pass the international quarantine barriers experienced with other plant material.

Other propagation techniques are less utilised by commercial nurseries, either because of the space and stock plants required or because the techniques are only suited to a restricted variety of plants. Division and separation for example, involve physically separating plant material and are fantastic ways to multiply a variety of monocot species, which include grasses and other clump-forming plants and bulbs, among others. However, the techniques are less suited to dicots, as they are only useful for species that produce rhizomes and stolons, which can be cut apart to produce new plants, e.g., Sacred Bamboo (Nandina domestica). The viability of division and separation as techniques for commercial nurseries also comes down to the species’ sale value, versus the time and space required to raise a dividable plant, but for the home gardener they are fantastic options.

Layering is another less utilised technique in the propagator’s arsenal. We see naturally occurring layering around us all the time, and generally refer to it as seeing ‘runners’ on plants, like you’d see on strawberries for example. Artificial layering involves getting parts of a plant to develop and set down roots while still attached to the parent plant, and there are numerous techniques involved. The idea is that because the newly rooting plant material is still attached to the parent plant, a much larger section can be taken than would be possible with a rootless cutting.

Aerial layering is one of the more interesting forms of layering and involves cutting around the cambium layer of a substantial plant stem, then wrapping the wound in a medium (often sphagnum moss) and an impermeable outer layer (often cling wrap and aluminium foil, although commercial casings are also available). Over time, roots emerge from the wound and colonise the sphagnum moss, resulting in a good sized, ready to pot plant, perched in the canopy of the parent. Whatever the technique, propagation is a vast field. Propagators are always improving, whether it is through their techniques, technologies or by utilising new and helpful products. If you’ve never propagated a plant, it’s time to start, and if propagation is your field, I’m sure you’ll agree, you won’t want to stop.