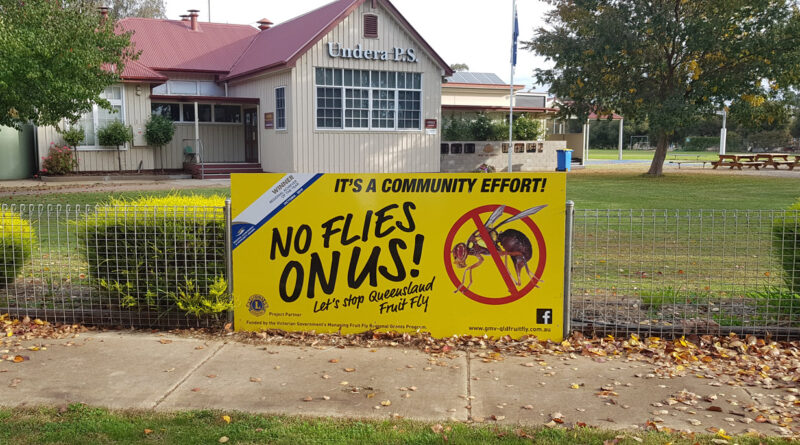 The Hort Frontiers Fruit Fly Fund aims to control the fruit fly populations that impact the productivity of Australian horticulture industries. At the core of the Fruit Fly Fund is the ground-breaking $60 million SITplus partnership. The SITplus program pulls together some of the world’s leading fruit fly experts and research organisations, to deliver an integrated solution to the management of Queensland Fruit Fly (Qfly).

The SITplus initiative has been a particular success in Cobram, Victoria. The pilot program involved the weekly release of over two million sterile fruit flies over the township of Cobram and, in partnership with the area-wide management program of the Goulburn Murray Valley Regional Fruit Fly Group, resulted in an 83% reduction of fruit fly activity within the town.

The success of the trial in Cobram is largely due to the collaboration between research funded through the Hort Frontiers strategic partnership initiative and local efforts to curb the impact of fruit fly in the area.

“The basic approach of the SITplus program is to rear millions of male fruit flies, sterilise them by radiation and release them into the wild, where they mate with females in the wild population. As the released flies are sterile, the females’ eggs fail to hatch, and the next generation is greatly reduced,” said Macquarie University’s Professor Phil Taylor, the Director of the ARC Centre for Fruit Fly Biosecurity Innovation. “While the concept is simple, each operational step requires a huge effort of R&D to get it to work.”

“We’ve been deeply impressed with what the community of the Goulburn Murray Valley has achieved alongside the SITplus program in their area. The release of sterile flies over Cobram aims to suppress an urban population and prevent it moving out into the surrounding horticulture. How the program is managed in town is absolutely critical to how growers are impacted by the efforts, and it was clear how connected the community in the Goulburn Murray Valley feels to horticulture. Thousands volunteered their own time to address an identified industry problem and their efforts have made a tangible difference to the horticulture industry in the area.”

“The results we’re seeing in Cobram, as a direct result of the SITplus program, are really quite exciting,” said Dr Bishwo Mainali, the technical lead of the program at Macquarie University who oversees all the research and operations of the project. “What we have seen over the last three years is a greatly reduced Qfly population in Cobram, and the positive impacts of sterile releases were realised quite early following the start of the release trial.”

“This trial has clearly demonstrated that the sterile insect technique is very effective in suppressing fruit fly populations. The next phase will be to broaden the program to other affected regions so that they can benefit from the technology and research.”

“From 2017 to 2019, our trapping data across the region recorded a 60%  reduction of Qfly across the whole Goulburn Murray Valley, and where we had the SIT trial in Cobram, there was an 83%  reduction,” said Tony Siciliano, President of the Cobram and District Fruit Growers Association, and a commercial orchardist. “The area-wide management platform creates the perfect environment for the release of sterile flies because we’ve already created the awareness and support within the urban community – and that’s where the Cobram drop zone was. The urban community were in complete support, and when you combine these two strategies you get outstanding results.”

Ross Abberfield is the Goulburn Murray Valley Regional Fruit Fly Coordinator, and his job is to lead the implementation of the multi-award-winning program in the region. The Goulburn Murray Valley (GMV) Regional Fruit Fly Group’s activities are funded by the Victorian government, and Hort Innovation collaborates with them through the SITplus program. Fruit fly area-wide management is about creating awareness, education and engagement across the community, industry and government to manage and reduce fruit fly, in one word, it’s about “ownership.”

“The fact that we’ve got such a high-class area-wide management program in the area has enabled a really successful release of sterile fruit flies in the area. Going forward, our aim is to make our program more sustainable, and it would be great to see the sterile release program expanded across broader areas, so that we can continue reducing Qfly populations and limit their impact on horticultural industries.”

Adrian Conti and his family own and operate 100 hectares of orchards in Cobram in Victoria, and near Griffith in NSW. Adrian’s family grow apricots, nectarines, peaches, plums, apples and pears, all sold for domestic and export markets.

Adrian said that “fruit flies are a pest no one wants, and the SITplus program has made all the difference in Cobram. Growers are happy, we’re getting fruit to market and to my knowledge there hasn’t been any commercial fruit from Cobram that has been infested with fruit fly and that’s our number one goal. Having the SITplus program active in Cobram complements everything that we do – it’s all about growing fresh produce that isn’t damaged by pest or disease, and ensuring the consumer gets a better product.”

Cover image: An example of the campaign materials used in Cobram to raise awareness about Qfly