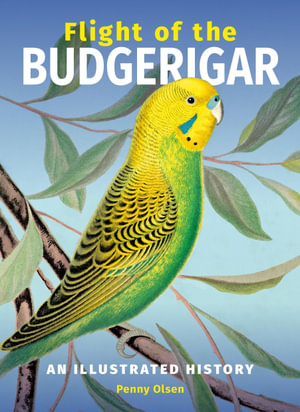 Whether you are a bird enthusiast or not, Flight of the Budgerigar is a really interesting book, particularly the history which goes back millions of years to fossils.  This little Aussie icon has become the most caged bird in the world, although I personally prefer to see birds in their natural habitat.

Budgie territory spreads far and wide throughout Australia and this well researched book is educational.

“Indigenous people of Australia have a deep history with the Budgerigar. they appear in legends of Indigenous groups such as the Waripiri. In the Kimberly the coming and going of budgies announces the seasons and their associated weather. They arrive with thunderstorms around the start of the wet season and breed at its end. Traditionally these times of abundance also provided sustenance to inland clans.” Budgies have evolved to cope with extreme weather conditions and can survive for months without drinking water! Having said that many have perished when extreme weather conditions are persistent.

I am a horticulturist and as such love the natural world. I loved the fact that this little Aussie bird has entertained people from royalty to parliamentarians to everyday people. They are clever and interactive.

In the 1800’s the export and trade of budgies was phenomenal. In Australia between the 1840’s and the 1870′ suppliers could not keep up the demand for budgies in England.

The illustrations are excellent and as they say a picture tells a thousand words. At the back of the book there is a chart that includes indigenous Australian names for Budgerigars in different language groups.

I highly recommend this book. It would make an excellent gift for many people as well.

Below is the official media release:

The Budgerigar is arguably Australia’s best-known bird, yet many of us aren’t aware that it is natively Australian. Or that today’s super-sized, show budgie is as different from the free-living

original as a chihuahua from a wolf. A new book sets to change that. In Flight of the Budgerigar respected ornithologist Dr Penny Olsen, has written the authoritative history of the beloved

Budgerigar. Lavishly illustrated in full colour, Olsen takes the reader from the Dreamtime to the colonial live bird trade, the competitive culture of the showroom and today’s thriving wild

Since 1840, when ornithologist John Gould took living specimens to London, this little parrot has been on a remarkable journey as Australia’s first mass export; its story includes British queens, spies

and nobles, Japanese princes, Hollywood stars and world leaders. Far from the cosy domestic lives budgies live today, the native budgerigar survived in boom-bust cycles in the arid inland of

Australia. Life was often short; if they were not fodder for predators, they starved or had to struggle their way to districts closer to the coast. For the Warlpiri and their Arrernte neighbours

around Alice Springs, the Budgerigar (in its ancestral form) was also a totem animal, featuring in art, ceremonies, songlines and legends. Packed full of illustrations, including works of art and

contemporary colour photographs, Flight of the Budgerigar is a fascinating visual history of one of Australia’s most iconic birds.

• The budgie’s strong connection with Indigenous Australia is

brought to the fore

• A visual feast of illustrations, artwork and colour photographs

• Book text and photos extracts are available for media use

Penny Olsen is an Honorary Professor in the Division of Ecology, Evolution and Genetics at The Australian National University. After a career as a field biologist and ecological consultant, she

is now mostly occupied writing books about Australian natural history and its recorders, both artistic and scientific. She has written more than 25 books, including Australian Predators of