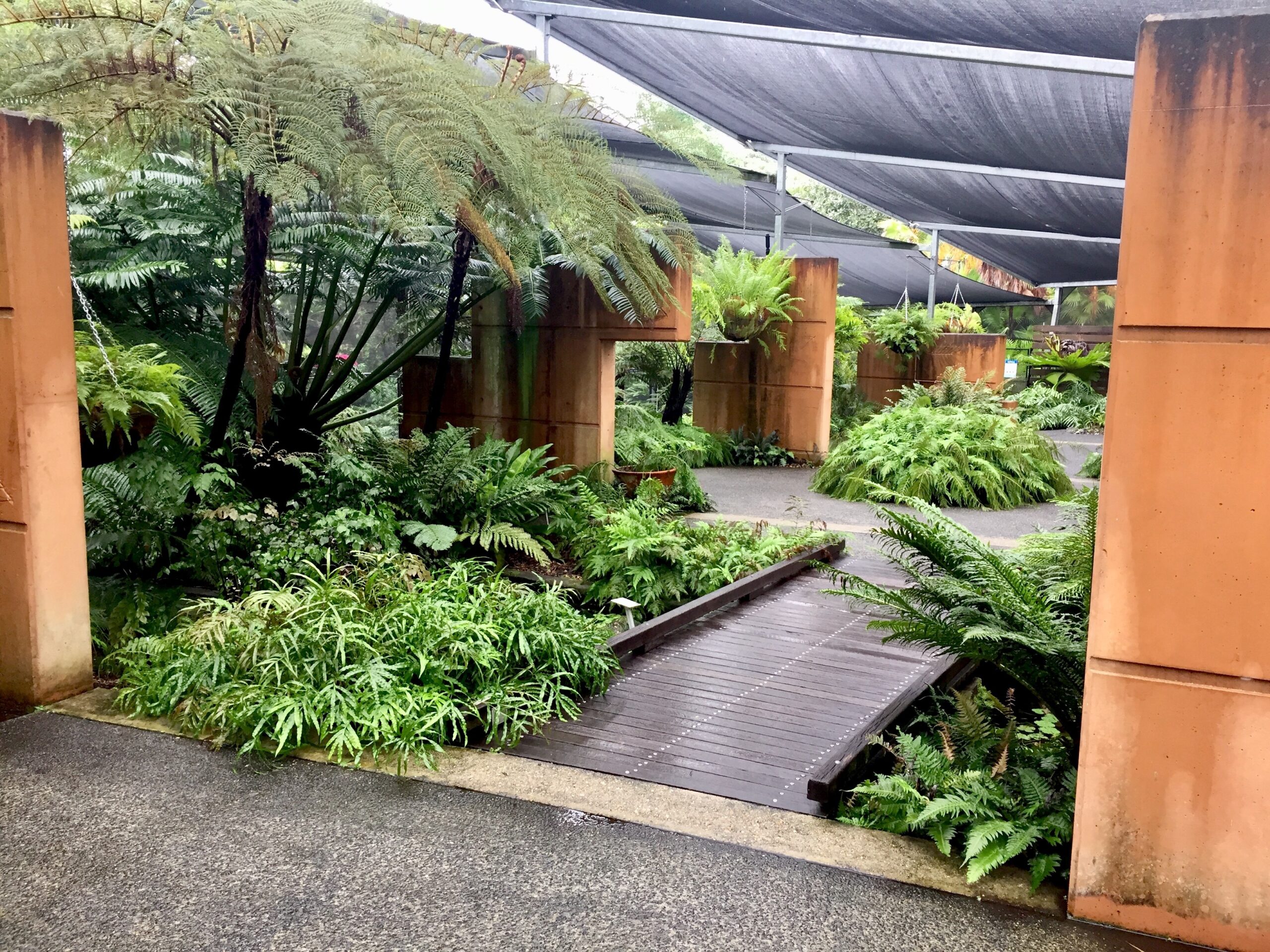 Long before today’s online world created an insatiable desire for exotic and unusual indoor plants, pteridomania, a Victorian craze between the 1840s and 1890s, saw the desire to collect ferns in Britain and its colonies. Glass houses, conservatories and ‘stumparies’, naturalistic displays of felled trees and exposed roots often shrouded by hardy ferns, allowed the wealthy insatiable collectors to display ferns collected from around the globe.

In Australia, with a less harsh winter climate, Fern Houses, often called ‘Bush’ or ‘Shade’ Houses of slatted timber, hessian and brush were the drawcard for botanic gardens and stately private homes, to display the newly catalogued shade-demanding plants found in the Australian bush, as well as exotic plants arriving on ships from around the world. Brisbane City’s first botanic garden, located adjacent to the city centre wharves, was home to a stunning Fern House by the late 1800s that also featured palms, orchids and other shade loving native and exotic plants.

The Fern House at Brisbane Botanic Gardens Mt Coot-tha is a purpose-built structure that provides an ideal environment for displaying a fern collection of over 80 species, varieties and cultivars. The design allows the collection to be protected from wind, maintains a relatively high humidity with moist soil and provides dappled light. With fern forms ranging from small and delicate plants to large tree ferns, these plants that reproduce via spores and have neither seeds nor flowers, are recognised as primitive plants, and have been found in fossil records over 300 million years old. Today, ferns are most abundant in the moist rainforests of tropical, subtropical and temperate climates, whilst some have even adapted to life in semi-arid areas through their ability to desiccate in the dry and ‘resurrect’ after rain.

The Fern House at Brisbane Botanic Gardens Mt Coot-tha has striking partial concrete walls featuring fern impressions that minimise wind flow-through, whilst maximising thermal mass cooling in summer. The extensive shade cloth roof and walls reduces direct sunlight throughout the day whilst further controlling drying winds. The Fern House is designed with a series of “viewing rooms” that display different aspects of ferns and as an aid to education and interpretation by the visiting public. Pathways and interpretative signage lead visitors on a journey to view a selection of Australian native and exotic species, varieties, forms and cultivars. From ferns living on rocks and trees, to those living in water, this collection highlights the variety of these plants and the many parts ferns can play in modern garden design. This is further enhanced with ferns grown in pots and hanging baskets, displaying the diversity of ferns that can be used in even the smallest of spaces, matching the explosion of the popularity of indoor plants.

Throughout the world, more than 10,500 species of ferns are an essential part of plant life on earth, providing habitat, food and other materials for animals and people. The Indigenous people of many lands discovered their value for food, medicines, dyes and fibres. The loop walkway takes the visitors through interpretative stories. At the entrance, signage explains to visitors “What is a fern?”, imparting information on fern evolution, parts of a fern and the fern life cycle.

The eight displays showcase and interpret different aspects of the ‘life of ferns’ and their habits, along with signage that indicates their use, be it ornamental, medicinal, cultural or as food.

Today the Fern House provides a beautiful and educational facility for visitors, horticulturists and architects, to discover how ferns can be used contemporaneous with our modern-day homes and buildings, whilst providing links to our ancient past, world-wide traditional ethnobotanic use, and as objects of horticulture desire.