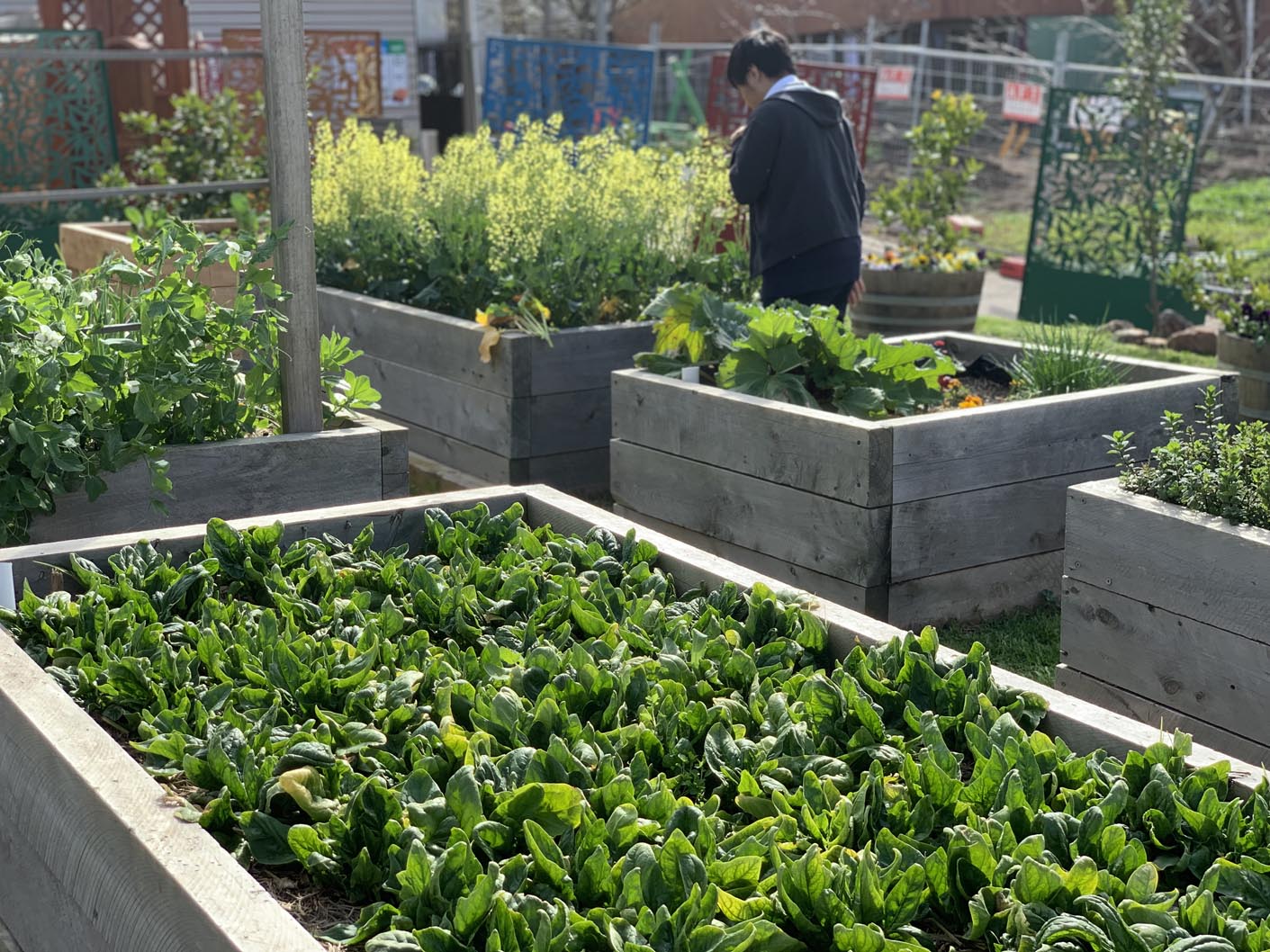 Remember the days when your parents and half the neighbourhood had some form of vegetable garden in the backyard, and the many hours spent harvesting the food, sharing the produce and the swapping of seeds amongst neighbours, family and friends? This was generally all part of the experience of growing up in the suburbs and for me, one that set me on the path to a future in horticulture.

Over the last 30 years I have designed and built food gardens of all shapes and sizes for clients, family and friends and in the past seven years, I have seen the rise in urban and community food gardens that are a pleasure to design, build and manage.

One specific project that I personally manage and have written many articles on, is a food garden inside a senior/secondary school that produces food for the students and staff, and to the onsite restaurant and café that also serves as a teaching aid for students wishing to pursue a career in hospitality. This urban food garden, measuring over 2000m2, is rather large and is literally expanding each year. The garden provides a vast amount of food each week with excess produce being funnelled to local communities and food banks.

Urban food gardens are now emerging within built environments, on roof tops, in disused vacant lots such as carpark spaces, within school grounds and old factory sites, and also amongst residential sites such as courtyards, communal grounds and on the vertical plane, space permitting. Urban and peri-urban agriculture has definitely taken a stronghold around the world and its future may just be the way forward for many reasons. Let us take a look at the social, economic and environmental benefits of growing food inside our built environments and how we can re-imagine our food system.

Growing food alongside where individuals reside makes sense. Not only does it reduce the impact of transport and storage time required, it also allows for growing a much larger variety of seasonal fruit and vegetables. Selecting varieties of fruit, vegetables and herbs with a focus on season and taste rather than storage allows the ‘local/in-house farmer’ to access produce on a needs basis and hence freshness is maintained. The general quality, including taste and aesthetics, is going to be a cut above the produce we have come to expect to see on supermarket shelves. These growing sites are utilising spaces and locations around the built environment that would typically be vacant.

Communities residing in cities are less likely to have a garden and an opportunity to get their hands dirty and be the creators of their own produce. By providing city-goers with access to growing spaces, it also provides respite from work and daily stresses, as well as the feeling of connection with nature that is very much lacking.

Throughout our cities and suburbs, food insecurity is largely experienced by low income households. The need to address this issue can be observed by the many urban food gardens throughout the world that assist in supplying affordable and nutritious food to those who need it most. Urban farming has demonstrated that it can improve access to affordable food but unfortunately such farming initiatives are typically required to be supported by volunteers, or need to attract dedicated funding, in order to fully operate and flourish.

Urban farms can also provide a place for education around how food is produced and the many benefits of a healthy diet. Furthermore, education can also focus on the reduction of food waste, the benefits of organic food, equitable food access and demonstrating to others the skill of growing your own food. It can also open up people’s minds to what a career in a horticulture might look like.

One aspect I’m really drawn to, is the creativity of these growing spaces and also the actual locations of farms. I have experienced farms on the rooftop of shopping centres, at restaurants and cafes and also as mentioned earlier, in school settings.  Through my work as a consultant in the green infrastructure industry, I have been introduced to many green roofs around the world where buildings have either been adapted to become dedicated gardens or have been purpose-designed and built.

Green spaces, irrespective of the height at which they reside, can provide many environmental benefits. These benefits include the enhancement of biodiversity, the improvement of air quality and assisting in the reduction of the urban heat island effect. The mitigation of storm water runoff and flooding is achieved when these farms are grown in and around vast amounts of impermeable surfaces. This can also assist in reducing energy consumption when grown in, on and around buildings.

Urban farming can reduce or remove food-related logistics, however, are all the environmental advantages perceived with urban farming better than current agricultural practices? Current large-scale monocultures, which in some cases are heavy users of fertilisers and pesticides, tend to be void of any diversity in insect life.  On the other hand, urban farms tend to nurture the soil, use less fertilisers and in some cases use little or no pesticides and promote biodiversity. The question remains as to whether these inputs being applied by urban farms are performed at the correct rates, or being disposed of correctly, and is this actually promoting the benefits of a healthy soil and diversity of life forms? This is important especially when fertilisers and soil additives filter through the soil profiles of urban gardens that are connected directly into stormwater outlets. The use of soil additives in any form also needs to be monitored when used in these built-up environments.

In some cases, especially so for roof gardens, there may be an investment required to transport soil, products and labour to such heights and to city locations. In looking at more traditional agricultural practices, it’s likely that the expected produce output will typically outweigh that of an urban setting. Urban farms are not expected to feed entire cities, however, they do promise to deliver on the many benefits mentioned throughout this article.

This discussion, and arguments related to the economics of urban farming, are valid yet don’t necessarily factor in the qualitative benefits, which at times may not be easily quantifiable, such as providing healthy productive green spaces, adding to a city’s aesthetic appeal and attraction and addressing food health. Only when these aspects are factored in, are we making better application of the economics around these ventures. This could be a possible new way to assess and address urban farming while being careful to not draw comparisons when two different forms of food production are at play.

The overall costs per square metre of urban farming compared with traditional agricultural farming may be higher due to differences in aspects such as labour and material costs, however, there are some costs that even further push the economic viability into the red. The preparation of urban sites that are destined to be constructed on old, contaminated sites require some form of decontamination to merely allow a site to be deemed fit for food production.

In identifying relevant costs upfront prior to even establishing urban gardens, which is well before the food production stage, the questions remains, should communities continue to invest in these forms of food production, as the sustainability model is open for discussion and debate?

There are some countries, such as in the US and parts of South East Asia, that are already creating urban gardens in and around their cities which is motivated by their desire to provide food security within their own borders, enabling them to be more resilient to outside food pressures and less reliant on imports. Singapore being one country that is very reliant on imports, with over 90% of their food purchased from other countries.

Just recently, I read an article published by the US Department of Agriculture which reported a 2.6% increase in consumer costs associated with fresh vegetable and fruit during the months of March and April, citing COVID-19 as the reason for this. There was a direct correlation between the reduced capacity in the supply chain which resulted in delays and inflated costs.

As we enter a world that is predicted to see more than 70% of the world’s population living in cities by 2050, we need to thoroughly understand the best measures to ensure food security and to address and overcome the challenges associated with urban farming. To add to this, there has been a decline amongst the agricultural workforce which could jeopardise and question general food security and production.

It’s widely known and understood that in Australia we produce enough food for 60 million people, however, we have more than 2 million people dependent on food relief annually due to economic hardship.

So, as we continue to live in a world where cities are gaining greater focus based on estimated future inhabitation rates, this is reason enough to continue to experiment, learn and evolve the way in which we build, promote and value urban farms, and ensure they become places that highlight the best of social, environmental and economic principles, because after all, not all farms are created equal.

Michael Casey is Director of Evergreen Infrastructure and MJC Horticulture, National President of Australian Institute of Horticulture and currently sits on the council with Therapeutic Horticulture Australia. E: president@aih.org.au or Michael@evergreeninfrastructure.com.au