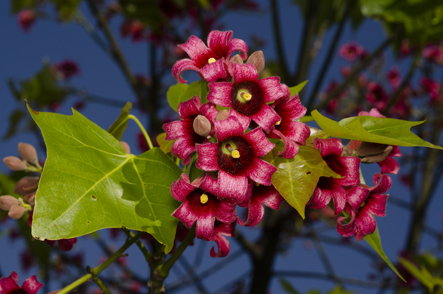 Origin: Brachychiton ‘Griffith Pink’ is a hybrid between B. discolor and B. populneus. It is thought that this cultivar originated in the Murrumbidgee Irrigation Area. The actual place of origin of this cultivar is obscure, as checking with herbaria in Queensland and NSW revealed a collection at Condong, NSW (near Tweed River) on alluvial flats.

Dr G. Guymer of the Queensland Herbarium located a naturally occurring hybrid at Boonah in 1985, though no other collection of such a hybrid had been made prior to this time. Cultivated collections of this hybrid have been recorded from Deniliquin (1914), Tumut and the Royal Botanic Gardens in Sydney. The cultivar was first received by the Authority in January 1981. Registration applied for by MR J W Pyle, New Era Nursery, Wahgunyah, Victoria.

Characteristics: This cultivar will grow 9 -10m tall. The mature leaves have prominent lobes and are maple-like in shape. Mature leaves are up to 12cm broad at their widest point and are distinctly veined. The flowers, found from approximately November to March, are pink in colour and very conspicuous. They are slightly hairy, with the hairs being a light rusty brown colour. The underside of the calyx is mottled with white.

Cultural notes: Cultivation requirements are similar to those required for B. populneus.

Propagation: This cultivar has been successfully grafted on to B. populneus.

Uses: Can be grown as a showy feature plant.

Availability: Humphris Nursery. For other suppliers, search on PlantSelect.com.au