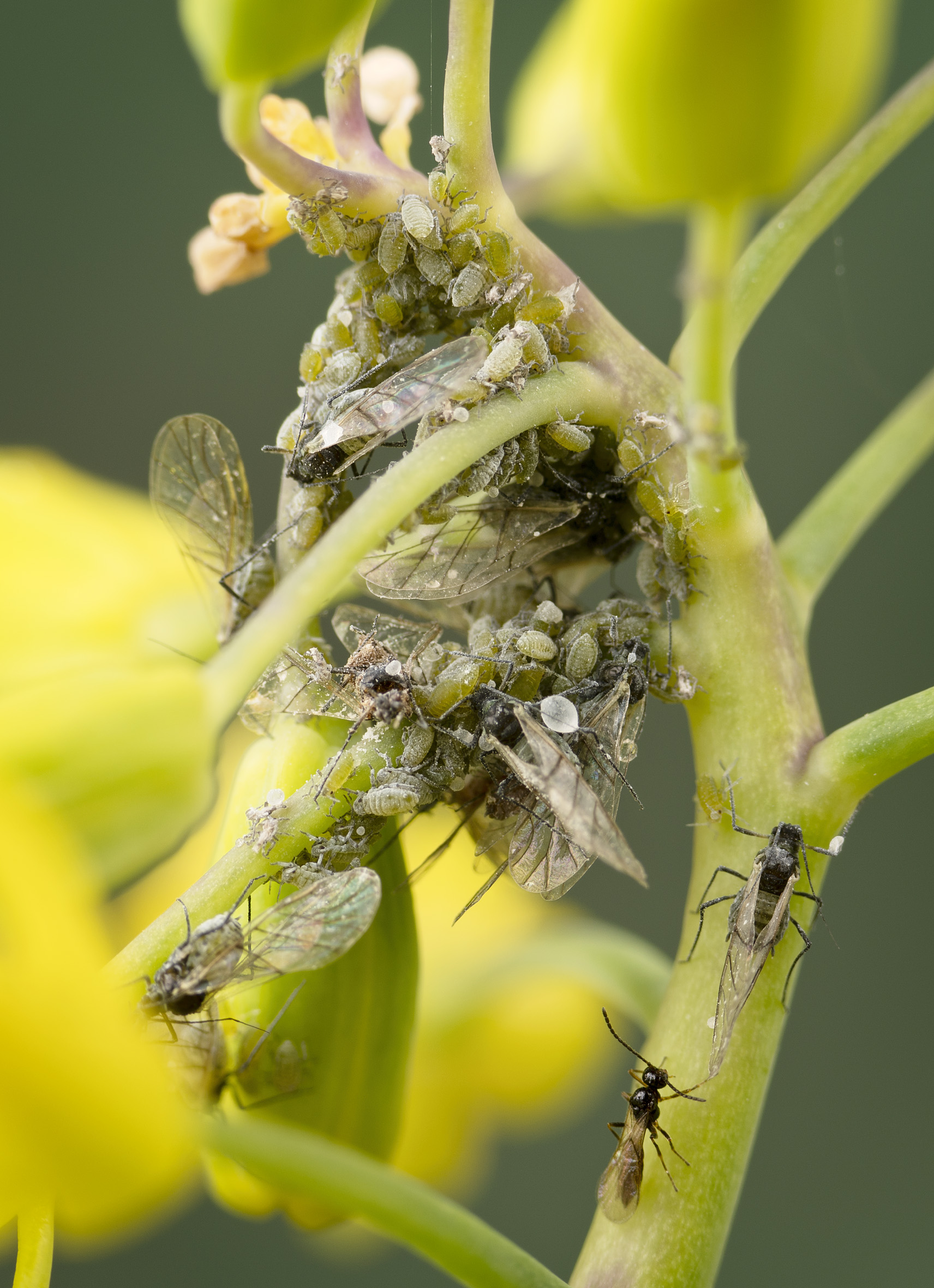 Aphids thrive in warm, moist conditions so they are often the first insect pests that we notice in spring. Most of the aphids that cause problems in Australia are introduced from elsewhere and it’s likely they are here to stay.

There are about 175 species of aphids in Australia, and the vast majority of them are introduced species. On a global scale, there are more than 5000 species of aphids, of which about 250 species are considered to be economically significant pests. Aphids have been around for a long time, and fossil records show that aphids have been present for at least 150 million years.

Aphids are a problem because they can cause direct damage when sap sucking and may also cause indirect damage by transmitting plant viruses. Aphids also excrete excess plant sap as honeydew upon which sooty mould may grow, causing further damage and unsightliness.

The first aphids I noticed this season were cabbage aphids Brevicoryne brassicae which were attracted to some kale flower spikes, and they began to breed there. Almost as soon as the first aphid young (nymphs) were noticed, I found a small wasp among them, it was the cabbage aphid parasite Diaeretiella rapae. Within a week the cabbage aphids were under control and a serious outbreak avoided.

This is how things roll in my vegetable garden. Aphids are always controlled by aphid parasites, or predators such as lacewings and ladybirds, or both. All I have to do to make that happen, is to have a variety of plants that flower at various times during the year, so that the parasitic wasps always have a nectar source. I have never sprayed anything on aphids in my garden, because I don’t need to. This is biological control in action, and as we know, biological control is one of the main components of integrated pest management (IPM).

We recently lost a well-respected entomologist, Professor Simon Leather of Harper Adams University in the UK. Simon was a leading aphid specialist, an inspirational teacher, and an expert on biological pest control and IPM. I knew of Simon’s work mostly through his writings in his blog Don’t forget the Roundabouts. Apparently, he was an inveterate user of Twitter, something I avoid like the plague, where he engaged in lively discussions with other scientists and students. He was often quoted in media around the world, such as here in The Conversation in November 2013, where he outlines the fundamentals of IPM rather eloquently:

“Integrated pest management, as it is formally known, is the selection and use of pest control measures to ensure favourable economic, ecological and sociological outcomes. The use of pesticides is only one way to achieve this. An integrated programme could include biological control, the use of resistant plants, the diversification of the farm landscape through conservation headlands (an area where weeds are allowed to grow) and cultural methods such as crop rotation or intercropping (growing crops close to each other). Even scare-crows can be part of such a programme. This, of course, needs to be backed up by a detailed knowledge and understanding of the biology and ecology of the pest species, their natural enemies and the habitats that they live in. All of which makes it quite an intellectual challenge.”

I have always thought that knowledge is one of our best weapons against insect pests. In an IPM system this can be achieved by monitoring, i.e., going out into a crop, garden, nursery or orchard on a regular basis to assess numbers of pests and beneficials alike. Then an informed decision can be made about whether any further action is necessary.

Much has been made about the decline of insects over the last few years, but pest insects are not necessarily in decline. Simon Leather was a voice of reason on this topic of insect decline, and the notion of “Ecological Armageddon”. As I have written on several occasions, the decline of insects is a very complex story and while some insects are declining, the populations of other insects are relatively stable. This dichotomy can be seen in results from the Rothamsted Insect Survey in the UK. a survey which has been running since 1964.

The Survey operates two trap networks throughout the United Kingdom that sample aphids and moths using suction-traps and light-traps, respectively. The networks represent “the most comprehensive standardised long-term data on insects in the World”. What the data shows is that over the long-term, moths have declined significantly (−31%), but aphid totals were quite steady with a non-significant decline (−7.6%). In other words, moths are in trouble but aphids will be with us for a while yet!

I will let Simon Leather have the final word on the decline of insects:

“I hope for the sake of our descendants that the reports of an “Ecological Armageddon” have been exaggerated. This should, however, be a wake-up call to all those with the power to do something to mitigate the decline in biodiversity worldwide. Governments need to respond quickly and to think long-term and responsibly. The current attitude of governments to think in terms of the outcomes of the next election is no longer a viable one for the planet. It is precisely that attitude that got us into the situation that we find ourselves in now.”