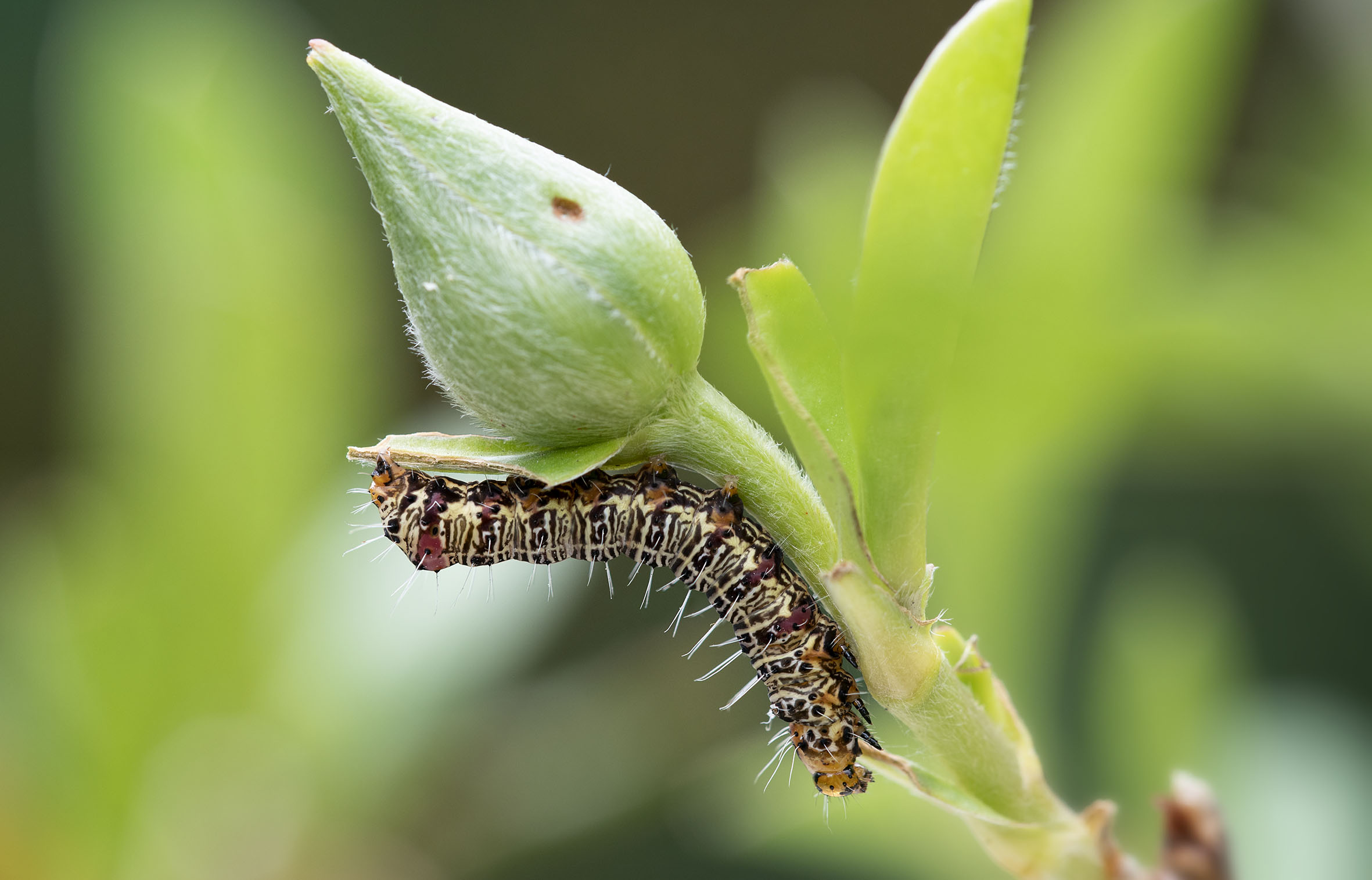 Most cultivated plants are attacked by a mixture of introduced and native insect pests. You may be surprised which pests are the native ones.

I recently found some caterpillars chewing into the leaves and stems of my climbing guinea flower, Hibbertia scandens. Nothing remarkable there, except the caterpillars were the larvae of Phalaenoides glycinae, otherwise known as grapevine moth. Most people are stunned to learn that this is a native insect, and its native hosts are various species of hibbertia. Phalaenoides glycinae larvae developed a taste for grapevine leaves soon after grapevines were introduced to Australia. When given a choice between grapevine leaves or hibbertia, grapevines win nearly every time.

Grapevine moth larvae are conspicuous black and white patterned caterpillars up to 50mm in length, with a pinkish-red hump, small pink markings on the sides, and a yellow-brown head. It is thought that the pink hump is a decoy to divert birds away from the vulnerable head region. The larvae are mostly smooth skinned, but they also have long white hairs sparsely scattered over their bodies. Larvae usually feed from the sheltered underside of grapevine leaves, strip back leaves to the main veins, and they may defoliate plants if not controlled.

Adult grapevine moths are attractive day-flying black and white moths with a wingspan of about 50mm. They are nectar feeders and only live for a couple of weeks. Grapevine moths have yellow or white wing markings, and tufts of bright orange hairs on the tip of the abdomen and at the bases of the legs.

Did you know that the common myna (Sturnus tristis) was introduced to Australia in 1862 to control grapevine moth and other caterpillar pests? That did not go well. Common myna birds are invasive pests themselves and are now spread through eastern Australia. Mynas were listed among the world’s worst invasive species by the World Conservation Union (IUCN) in 2000.

One of the world’s most damaging grapevine pests is the introduced grape phylloxera (Daktulosphaira vitifoliae), a small aphid-like insect. In Australia it is confined to a few areas in Victoria and New South Wales where it feeds exclusively on the roots of grapevines. In phylloxera infested zones the movement of machinery, grapes, soil and other items are restricted under the National Phylloxera Management protocol.

The citrus industry is also plagued by a number of introduced and native insect pests. Scale insects are very common pests of citrus. Hard (armoured) scales include pests such as red scale (Aonidiella aurantii) and white louse scale (Unaspis citri). These insects are usually very small (1-2mm) with a thin, hard, waxy cover. The saliva they inject during feeding is toxic to citrus plant tissues and causes the shedding of leaves and fruit, the dying back of branches, and the death of young trees. Hard scales do not produce honeydew.

Soft scales include pests such as soft brown scale (Coccus hesperidum), black scale (Saissetia oleae), many wax scales (Ceroplastes spp.), and cottony cushion scale (Icerya purchasi). Soft scales are usually about 3-5mm long and have a toughened upper surface of the body, rather than a separate cover. Soft scales don’t produce the toxic saliva of hard scales but do produce vast amounts of honeydew. Sooty mould grows on that honeydew.

Most scale insect pests are managed with a combination of horticultural oil sprays, and various beneficial insects including parasitic wasps and predators. Of all the scale insects mentioned here, only cottony cushion scale is native.

The citrus pest of most concern in home gardens is the citrus gall wasp (Bruchophagus fellis). This is an insect native to northern New South Wales and Queensland which has adapted from its native host, finger lime, to cultivated citrus. Citrus gall wasp is tiny (2.5mm long) and is difficult to see, but the grotesque woody galls caused by its larvae are much more obvious.

Female citrus gall wasps lay their eggs into the bark of soft twigs in spring. Larvae hatch out and burrow into plant tissue. By late spring, woody tissue forms around the larvae, the twig swells and begins to develop into a characteristic gall. The life-cycle is completed over winter and adults emerge the following spring, leaving the galls dotted with little holes. The wasps mate and begin laying eggs almost immediately, often on the same tree. Neglected trees may end up with very large galls.

Citrus gall wasp damage can be reduced by not pruning heavily in winter – which only encourages soft new growth for wasps to lay eggs in during spring. Don’t apply fertilisers high in nitrogen in winter or spring for the same reason. Citrus gall wasp egg laying can be disrupted by spraying the tree with horticultural oil in spring.

Existing galls should be pruned off, cutting well below the galls to make sure all larvae are removed. Timing is critical. Wasps emerge in most areas from mid-September until early November, so pruning prior to that is required, e.g., late August to early September. Another method is to shave off one side of the gall with a sharp blade to expose the gall contents to the air and dehydrate the wasp larvae. This method must also be timed appropriately.

The main difference between an introduced pest and a native insect pest is whether there are any beneficial insects to control it. If the pest is a native insect, there are nearly always parasites and predators which can help control it. For example, citrus gall wasps in commercial orchards can be controlled with releases of native parasitic wasps (Megastigmus spp.) which are specific to citrus gall wasp.