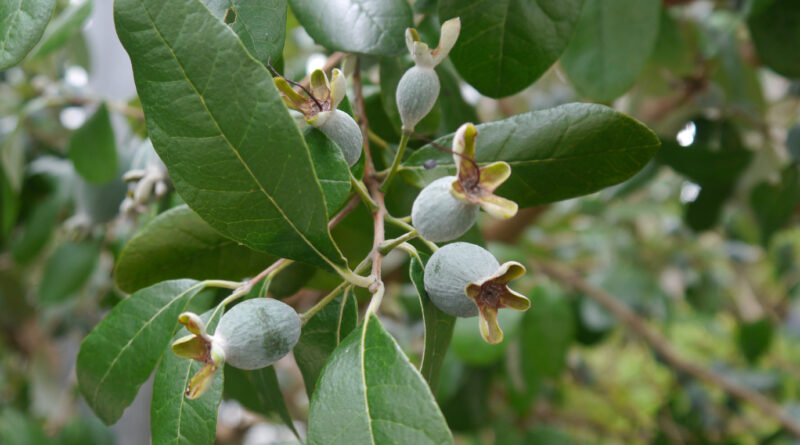 The word guava elicits thoughts of the tropics but as a common name it covers a wide range of fruiting trees. One of these is Pineapple Guava which is also known as Brazilian Guava and Guavasteen although it is not a true guava. Like so many of the modern plants, it originates in South America. It would have been part of the Columbian Exchange of the 16th century when so many food and medicinal plants moved from the ‘new world’ to the ‘old world’.

In that exchange, Europe picked up the key plants in the Solanaceae family that changed the nature of the European diet. Plants like tomato, chilli, capsicum and potatoes were taken to Europe. It was such a shift that there are many cultures in Europe and Asia that swear certain chillies and paprikas are endemic to their countries. Also, many South Americans would argue that garlic is part of their ancient foods yet it evolved in Western Asia.

Pineapple Guava or feijoa is a small, sweet fruit that comes from central South America in countries like Paraguay, Uruguay and Brazil. However, it didn’t move around the world at the same time as the Solanaceae plants, indeed it wasn’t until the very end of the nineteenth century that feijoa made its way to Europe. This plant likes warm temperate climates and doesn’t need a lot of water or rich soils. It is tolerant of moderate frosts and has proven to be quite adaptable to most temperate zones. Hence once it left its native home countries it quickly became popular in most settled parts of the world.

The plant was originally marketed as Feijoa sellowiana and it has retained the common name of feijoa. However, it actually belongs to the genus Accaand has the correct Latin name of Acca sellowiana. It is a member of the Myrtaceaefamily and has the classic myrtle flower with grey petals and bright bred stamens. The petals are edible and are favoured by many birds that also act as pollinators. The plant is also pollinated by bees and wind, although neither of these methods is extremely effective. Perhaps this has helped preventing this tough and adaptable plant from becoming a weed in temperate zones of Australia, USA and southern Europe.

There is much debate about how to better pollinate feijoa, as all the natural methods are sporadic and may produce a heavy crop one year and almost nothing for the next few years. Some feel that separate pollinators may assist the plants in producing fruit. In the wild, feijoa grow in tight clumps of a dozen or so individual plants. This would mean it is highly likely that each plant would be pollinated by a separate individual plant. It is not uncommon for some plants to require being pollinated from flowers on different plants and this reduces inbreeding of the plant, and helps protect the plant from disease and pest domination.

Seed-grown plants can take up to seven years to produce fruit which can be a long wait for the average suburban gardener. Cutting-grown plants (produced from cuttings of mature fruiting plants) will fruit within two to three years, however questions arise as to the propensity of plants from the same parent to self or cross pollinate. We have plants on two sites with one being a mature (30yo) small tree with no neighbouring plants. The others are all in close proximity to each other and are all seed-grown from a collection of very large fruiting individual plants. The seed was sown around 15 years ago and first fruited five years ago. An interesting observation is that both the single plant on one site and the four plants on the other site have displayed similar fruiting patterns.

The plant is a large shrub or small tree growing to around 5m tall and 4m wide. The flowers occur from early to late summer and the fruit develops over autumn. As I said above, the tree is a tough plant that is tolerant of drought, frost, humidity, poor and rich soils, temperatures from 1oC to 40oC and an altitude range of sea level to 1500m. It looks great in all these conditions and works as a specimen tree, in a large pot or as a formal/informal hedge. It is a plant that belongs in any small to large garden.

However, it is the fruit production that is not so versatile. Putting pollination aside (as it may not be pollination but early fruit formation that is the issue), it seems the trees need a consistent level of water, a winter chill period, consistent summer temperatures of around 20oC to 35oC, with minimum levels of humidity and reasonable light levels during flowering. Even if we get these conditions, the fruit is quite variable although there are cultivars with consistent medium to large fruit.

There have been many attempts around the world to establish a feijoa industry. It has been trialled every few decades in California since the 1920s without any success. New Zealand has developed a good industry and so has Georgia (country not state). Both have stable summer temperatures and water supply, and have done some breeding to produce plants that suit their environments.

Feijoas are a tasty fruit on an attractive tree. As a garden plant, it will grow just about anywhere but as a commercial food crop it needs some serious and prolonged breeding to target consistency in fruit size, shape and flavour. If you haven’t tried one, do so!