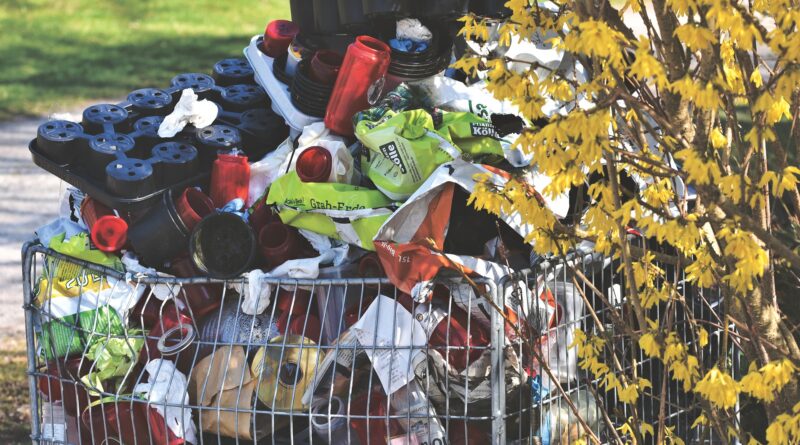 Australians produce 3.4 million tonnes of plastic each year but just 13% is recycled. And we’re above average because globally, only 9% of all plastic is recycled. With the future forecast of there being more pieces of plastic than fish in the world’s oceans by 2050, it’s a fate our quickly plasticising oceans seems unable to avoid.

Professor Thomas Maschmeyer at the University of Sydney came up with a solution, that will hopefully give gardeners the world over food for thought, with regards to what to do with all those plastic pots we accumulate.

Asking students I teach recycling and waste education to at Mackay Regional Council’s Materials Recovery Facility (MRF) what plastic bags are made from, there are often gasps of “no way!” when they find out they’re made from crude oil and gas. To be precise, most soft plastics are polyethylene, starting out as ethylene extracted from natural gasses and petroleum.

Placed in recycling bins, soft plastics create issues for most MRFs where they are viewed as contamination and are disposed of to landfill.

With Coles and Woolworths supermarkets partnering with REDCycle, there is already the option of placing soft plastics into REDCycle bins at these supermarkets. However, with only 4 out of 19 soft plastics used by your average Mackay resident being recycled, the recent development of hydrothermal liquefaction facilities offers significantly more promise for finally ridding our landfill piles, oceans and natural areas of soft plastics. Per day, REDCycle collects 3 million pieces of soft plastic across Australia which represents approximately 1200 tonnes of soft plastics annually.

In January 2021, the University of Sydney announced that Professor Thomas Maschmeyer had developed a process based on his catalytic hydrothermal reactor platform (Cat-HTR for short). The process involves combining the plastics with water at high pressure and high temperature which causes chemical transformations within the plastic. This then converts the plastics into new products including solids, liquids and reactive gases which can be used to make new plastics. The conversion takes just 20 minutes and uses low energy and minimal greenhouse gases. The invention offers hope for ridding our oceans of the 10 million tonnes of plastic items that enter them annually.

And the good news is that all types of plastic can be recycled using the Cat-HTR process.

Mura Technologies in the UK, is the British licensee of the Cat-HTR process which is owned by Australian company Licella Holdings, jointly founded by Professor Thomas Maschmeyer who was awarded the 2020 Prime Minister’s Prize for Innovation.

In Australia, Licella will be converting the soft plastics into oil to produce fuels, chemicals and new plastics, helping to unlock a circular economy for plastic.

Licella has announced Altona, Victoria, as the location for its advanced recycling facility. This offers an opportunity to divert 120,000 tonnes or 24% of the waste plastics sent to landfill annually. For biomass, Cat-HTR offers high value as a low emissions alternative to burning or burying biomass, which will help Australia transition to a low carbon circular economy.

So finally, there is a real hope that rather than ending up in our oceans, plastic will soon be returning to from whence it came – oil.