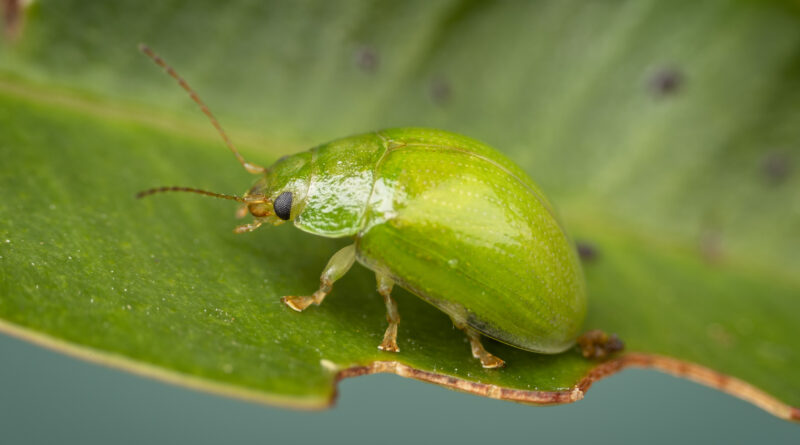 Most of us understand integrated pest management (IPM) as an environmentally sensitive way of managing pests and diseases in plants, be they in productive, environmental, or ornamental landscapes. IPM includes cultural, chemical, biological, genetic, and physical methods to control garden and landscape pests. However, as the adage goes, prevention is better than cure. Rather than relying on the use of beneficial insects to control problematic outbreaks of garden pests after they have occurred, think about how you design your garden or landscape in the first place. Here, two entomologists share their tips for making your garden less favourable for pests through careful plant selection.

Plant for your climate and soils

Denis Crawford, author of Garden Pests, Diseases & Good Bugs, firstly recommends selecting plants that are suitable for your garden’s climate and soil type. “That way, whatever you plant there is going to have the best chance to establish and resist or recover from insect attacks, fungal and other infections,” says Denis.

“Choose the most resistant varieties for diseases for plant type in your area. That way, those plants are less likely to succumb to a plant disease and are more likely to be able to fight off or recover from insect attack,” says Denis. A particular plant’s resistance or susceptibility to pests is variable and depends on individual plant characteristics (e.g., rolled versus flat leaf margin, hard versus soft leaf cuticle), the type, proximity and abundance of local pest populations;, and the health of the plant1. Denis explains that the more hybridised a plant is, the more susceptible a plant may be to pest and disease attack, especially if those plants are planted in monocultures such as long hedges.

“Lots of people now have Lilly Pilly hedges. Lilly Pillies have become more and more popular and there are many varieties now in cultivation. There are even dwarf varieties suitable for courtyards,” says Denis. However, these plants are now threatened by a relatively new pest, the Lilly Pilly beetle (Paropsides calypso), whose larvae and adults feed on the leaves, causing foliar damage.

“The Lilly Pilly beetle is a native of northern New South Wales and south-eastern Queensland where it feeds on members and cultivars of the Syzygium genus, including the Common Lilly Pilly (Syzygium smithii),” Denis explains, “In its natural habitat, the Lilly Pilly beetle would not be a pest as it is controlled by parasitic wasps and other insects. However, these beneficial insects are not necessarily found in a Melbourne garden into which a Lilly Pilly hedge is now planted.”

Creating a monocultural hedge may lead to the development of a pest ‘highway’. “If the Lilly Pilly beetle lands on one end, it will breed its way through the whole hedge,” explains Denis, “The same thing can happen with fungal and bacterial diseases of plants, often usually the fungal ones because the spores will move on.” Lilly Pillies can make excellent hedges given their screening qualities but rather than planting only those plants, consider mixing in other species to create a ‘tapestry hedge’.

Denis says that plant structure and function also play a key role in reducing the incidence of pest and disease in landscapes. Ian Smith, an entomologist and agricultural landscape ecologist, agrees, emphasising the importance of including a mix of groundcovers, grasses, shrubs and trees into a design to provide habitat for a range of beneficial insects. “Trees provide shade and humidity, and act as a deep nutrient pump, taking nutrients from deep down in the subsoil and returning them to the soil when leaves die and fall to the ground, promoting more diversity in the soil,” says Ian, “Larger trees and shrubs can also reduce wind speeds, enabling beneficial insects to move around more safely.” Soil biodiversity means that the plants growing in that media are more resilient to soil borne pathogens due to the presence of competition and pest predators.

Incorporate a diversity of flowers

Ian says that a garden’s shrub layer provides an opportunity to create flower mass and thereby get as much pollen and nectar into the landscape to attract and retain beneficial insects. However, by including a diversity of flower types at all heights of your garden’s structure, and not only in the shrub layer, you can cater to a wider variety of insects throughout the year. “When you have a diversity of flowering times, that means there is food for beneficial insects, such as the parasitoidal micro wasps, throughout the year,” says Ian. Denis says this structure can be achieved in the garden through classic border plantings where smaller plants lead up to larger ones.

Remember that grasses are also angiosperms (flowering plants) and can provide a valuable food source for insects if they are left to flower rather than being mown.

Whilst lawns provide attractive spaces for people to congregate, Denis says that they are typically monocultural. At best, many lawns are lucky to be planted out with two grass species, a cool season and a warm season variety to encourage coverage throughout the year. This limited palette requires a high level of input to maintain growth and reduce lawn pests such as fall army worm, scarab beetles or ants. Ian says that one way to have the best of both worlds, is to incorporate a landscape feature circle full of native grasses in the middle of a lawn, and to allow those grasses to grow and flower, thereby attracting beneficial insects to your garden.

However, Ian urges caution when trialling novel design approaches. “From my experience working in land management, it is always important to explain to your client why things are happening. There is no point putting in a wild grass meadow feature if the landowner thinks ‘Why did they forget that area?’ and then sprays glyphosate on the whole thing!” says Ian.

Add a layer of mulch

Mulch is another important layer in a garden’s structure according to Ian. Mulch suppresses light to the soil, making it harder for many weed seeds to germinate. Mulch also shades soil, enabling it to hold onto moisture better and making it warmer in winter and cooler in summer, making it more habitable by a range of creatures such earthworms, earth mites, springtails (Collembola) and soil fungi. “These better soil conditions make the plants healthier and more pest and insect resistant, while suppressing weeds as a part of IPM. The more diversity in the soil also promotes increases in beneficial insects like Carabidae (ground beetles),” explains Ian.

In edible gardens, Ian recommends scattering plants by type rather than planting blocks or rows. “If you have a big block of a single type of plant, insects can smell that from a mile away. And once they invade a plant, all their other food sources are only a short hop away if you have planted in blocks. If you alternate multiple different plant varieties, you create this confusing olfactory environment for insects, making it harder for them to sniff out their host,” says Ian. Most insects are not general herbivores and their host plants generally come from one family. For example, broccoli, cauliflower, Brussels sprouts and cabbage all come from the Brassica family (Brassicaceae) and therefore will be targeted by the same species of pests such as cabbage moths and white cabbage butterfly. Ian also recommends planting small decorative flowers into vegetable gardens, e.g. alyssum (Lobularia maritima) to attract beneficial insects. Year-round flowers provide food for a diverse range of microwasps such as Mymaridae (fairyflies) and Trichogramma spp., parasitoids of insect eggs.

“When you know which species you are trying to protect, then you will know which pest species are likely to invade. For example, if you want to plant a rose cottage garden, you know that aphids are going to be a key issue for the roses. So how do you design a garden around reducing aphids? To do that you need to understand their ecology,” says Ian. “For example, aphids will enter the garden on the wind, so can you plant a shelterbelt to reduce how many are entering? Also, aphids are prone to the aphid mummifying wasps which needs nectar, can flowers be planted nearby to promote this species?”

Healthy plants are much more capable of rebounding after a pest infestation and can prevent pests from reaching damaging population levels. So only purchase your plants from reputable nurseries where you know quality is controlled, and examine them for any obvious signs of pest and disease before purchasing them, e.g., leaf damage caused by caterpillars.

Some pests and diseases are harder to see, especially if they are soil-borne. However, Denis has one simple tip to help you when purchasing your plants. “If you are seeing sooty mould on the plant’s leaves, stems and twigs, then there are pests on that plant, it is that simple,” says Denis. Sooty mould is attracted to the ‘honeydew’ excreted by sap sucking insects like aphids, scale, whitefly, mealybugs and mites, well-known pests of ornamental and other plants.

“People often think that if they create a nice habitat for insects in their garden, that they will have more pests. Well, that is not the case. You will have less pests. Research shows that the incidence of pest species decreases while the incidence of beneficial insects increases if you increase the diversity of insects,” concludes Denis.

So, what are you waiting for? Embrace diversity in your next design to give your client’s landscape or garden the best chance of staying pest-free.