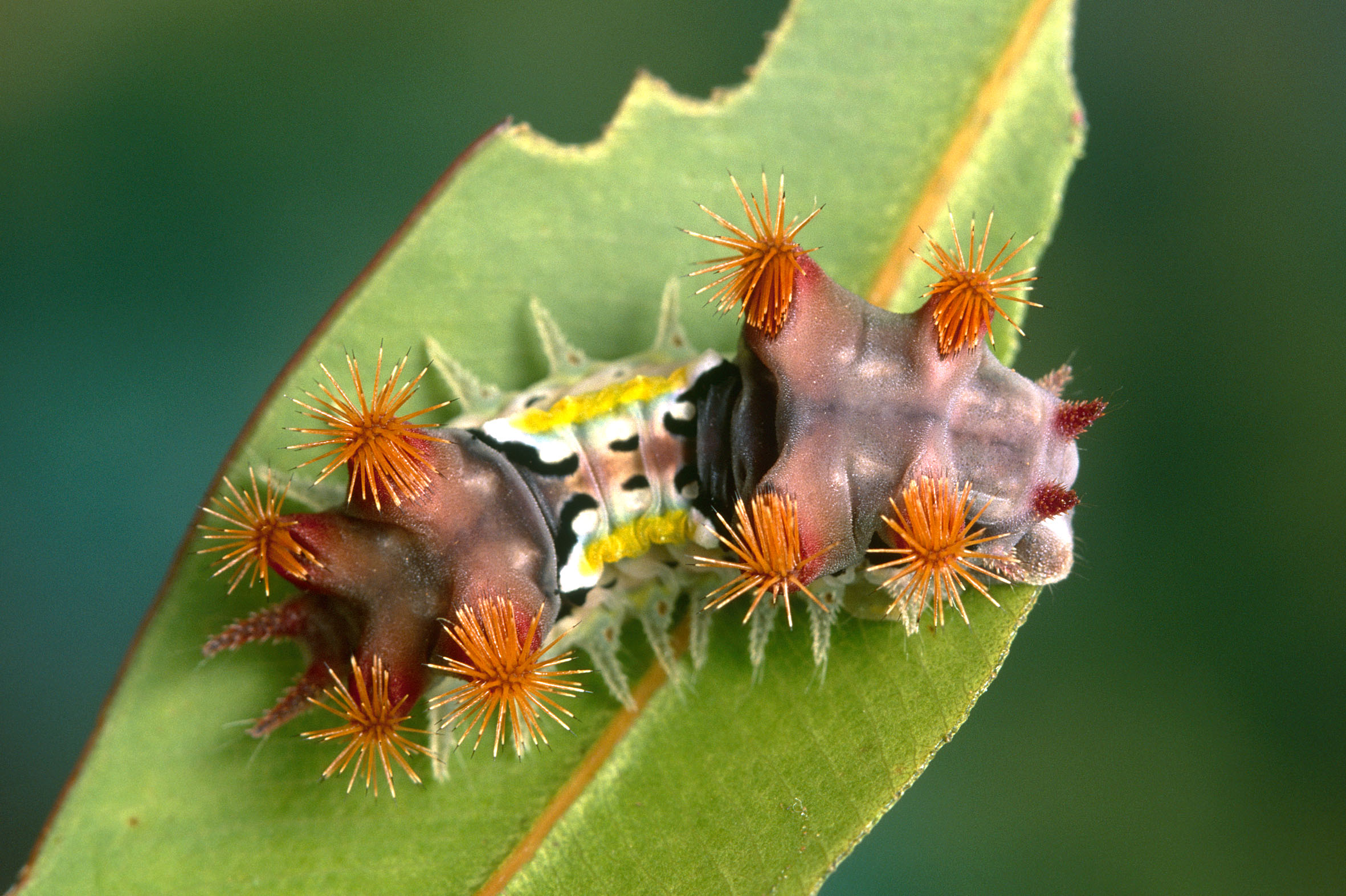 The immense diversity of insects has led to some amazing adaptations and mutual relationships with other organisms.

You might have read in the news recently about an environmental battle to prevent the clearing of 2000 hectares of native vegetation on a Cape York station. Five threatened species are at risk on the property, including the intriguingly named ‘antbed parrot moth’. The moth, Trisyntopa scatophaga, has an extraordinary relationship with the golden-shouldered parrot (Psephotus chrysopterygius), also on the endangered species list.

Moth larvae are caterpillars and most people immediately think of plant-chewing pests. Not all caterpillars feed on plants. The larvae of the antbed parrot moth live at the bottom of the nests of golden shouldered parrots and feed on the droppings from the chicks. They are not phytophagous (plant feeding) but coprophagous, i.e., they feed on excreta.

To show how it works I’ll use the words of the ornithologist William McLennan who described it in the early 1920s: “The larvae were present in large numbers in silken galleries matted together with frass and fragments of earth in the bottom of the nest. They appeared to be on the alert, occasionally one or two came out and explored the bottom and sides of the nest, but when excreta were voided by the young birds they swarmed out en masse and rapidly devoured it”.

The antbed moth is intricately linked to the parrots. The female moth lays its eggs in the parrot’s nest so that larvae hatch at the same time as the parrot’s eggs. The caterpillars spend their entire larval period in the nest and only feed on the droppings of the nestling parrots. When the parrot chicks fledge, the moth larvae pupate on the walls of the nest cavity and emerge during the following wet season, which coincides with the next parrot breeding season.

Coprophagous insects are not rare, just think dung beetles, but coprophagous caterpillars are. Things get even more interesting when we learn that the parrots only nest within termite mounds, usually the mounds of spinifex termites Nasutitermes triodiae. That’s right – the parrots have a relationship with two insects. Without the termites, the parrots have nowhere to nest, and therefore the moths would have nowhere to breed. Land clearing would mean the bulldozing of the termite mounds and so…

Not all termites are pests. The termites in this story are spinifex termites, and spinifex grass (Triodia spp.) is what the termites feed on. There are around 350 species of termites in Australia and about half of them feed on grass. Only a handful of wood-eating termites are of concern to people.

There is another antbed moth species, Trisyntopa neossophila, which has a similar relationship with the hooded parrot (Psephotus dissimilis). The hooded parrot is found in the Northern Territory and also nests within termite mounds. A third moth species Trisyntopa euryspoda has been reared from the nests of the eastern rosella (Platycercus eximius) in coastal NSW and the mulga parrot (Psephotus varius) in western Queensland – both of these parrots nest in tree hollows.

Not all caterpillars are pests. Of course, most caterpillars feed on plants, but just because they are feeding on a plant doesn’t mean they will necessarily destroy it. We have come a long way since the 18th century when insects were either viewed as pests, nuisances or completely irrelevant. For example, if you read the journal of Joseph Banks, written during his voyage with James Cook in 1770, you get the impression that he doesn’t think much of insects.

Despite it being the first time Western scientists had seen Australian insects, Banks summarises his encounters with insects as: “Of insects here were but few sorts and among them only the Ants were troublesome to us. Musquetos indeed were in some places tolerably plentyfull but it was our good fortune never to stay any time in such places, and where we did to meet with very few. The ants however made ample amends.”

There are an estimated 200,000 to 250,000 species of insects in Australia. To put that in perspective, there are about 25,000 species of native plants here. So much for Banks’ “Of insects here were but few sorts”. The incredible diversity of insects is due to a number of factors – their small size, their rapid breeding, their ability to fly, and that they have been on the planet for at least 350 million years. Their small size allows them to occupy niches not suitable for other (larger) animals. Their rapid breeding allows them to adapt quickly – just think how quickly insecticide resistant insects appear. Their ability to fly, for those insects that can fly, allows insects to disperse rapidly and gives them a better chance of avoiding adverse conditions.

The fact that insects have been around for so long, means they are well embedded in their particular niches. Insects have survived a couple of mass extinction events already, so their basic body layout (six legs, three main body segments), and their life cycles (usually complete metamorphosis or gradual metamorphosis), have been well tested.

I have written about the ecological services that insects provide in earlier Pest Files but it deserves repeating. Insects are important pollinators, crucial decomposers (think dung beetles again), seed dispersers, soil engineers (especially termites and ants), pest controllers, and insects are food for many other animals.

Some insects are pests in horticulture and agriculture, but the vast majority of insects are not. If we could tolerate ‘nuisance’ insects and encourage the ‘good bugs’ to combat the pests, we might help avoid the next mass extinction event. That might sound dramatic but according to many scientists, we are now on the brink of the 6th mass extinction event. Perhaps we need to rethink the way we do things – starting with the clearing of native vegetation. Next Pest Files: Eucalypt trees, even young saplings, can recover from severe insect damage without any intervention from humans.