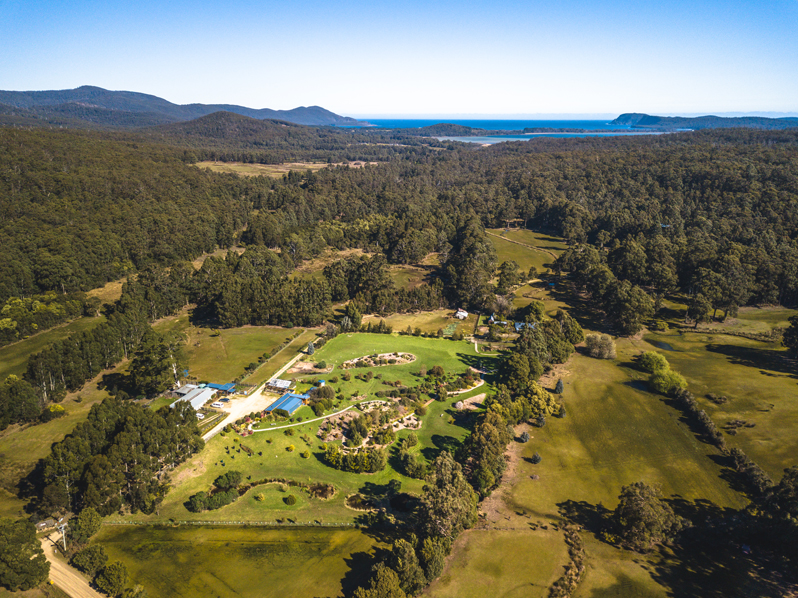 The Inala Jurassic Garden is a privately-owned botanic garden located on South Bruny Island, south-eastern Tasmania. Its relatively remote location, on an ‘island off an island off an island’, is rather a fitting place for a garden which features living plant families whose ancestors thrived on the ancient Gondwana supercontinent before it split to form today’s southern land masses – quite the Jurassic Park, with its plant equivalent of dinosaurs that are still with us today.

The idea for the garden is a culmination of almost 30 years of leading natural history tours around the world (my ‘real’ job) and has been inspired by Tasmania’s Gondwanan connections. The garden is located within a 600ha conservation-covenanted property ‘Inala’, which is predominantly comprised of natural vegetation and located near ancient cool temperate rainforest.

The concept began in 2012 when the decision was made to plant ‘a few’ species with Gondwanan lineages, so they could be used as an educational tool, both on the tours and for access to the general public.

A 2ha paddock on the Inala property was converted from a hay paddock, from a stud cattle enterprise, to accommodate the new plants. Landscaping began in earnest in 2013 with the addition of shallow lakes, huge locally-sourced Jurassic dolerite boulders, concrete easy-access paths and topographical changes to the garden beds, using local contractors and huge machinery. Researching and collecting specimens reached an obsessive level. The first specimens were planted in October 2013 and the garden opened to the public on 31 March 2014.

I had past experience with growing plants on a large scale through a commercial Brown Boronia plantation (36,000 plants), which we harvested annually for the essential oil industry for a period of over 15 years in the 1990s-2000s. However, it was a huge learning curve to research and provide a suitable home for over 700 different species from over 50 plant families from around the world. Strategic planting of species in microhabitats that we have created around the garden has largely been successful, and a mixture of cool climate to tropical, dry-tolerant to bog plants, are now growing happily together within the 2ha garden.

Plants from the Gondwanan landmasses South America, South Africa, New Zealand, New Caledonia, Papua New Guinea and Australia were planted in family groups to provide the best comparison between the species. Araucarias and Podocarps whose origins date back around 200 million years, and ancient flowering plant families such as the Proteaceae, Nothofagaceae and Myrtaceae (originating over 90 million years ago) are represented here. Monocot representatives such as the family Restionaceae (first recorded around 65 million years ago) are also featured, as are families of probably more recent lineage, such as some members of the Iris family which probably dispersed between the southern continents after the break-up of Gondwana. Interpretive signs for each family have been installed throughout the garden and we offer guided garden tours for those people who request additional interpretation.

Besides its aesthetic appeal and educational value, the garden is now registered as a Botanic Garden and increasingly, we are keen to contribute to conservation by working with other botanic gardens to grow insurance specimens of threatened species. This is a good fit with the ethos of our other businesses at Inala (education and conservation), and garden entry fees and sales from the adjoining gift shop, which stocks local crafts and books, contribute to the Inala Foundation for the conservation of natural habitat and threatened flora and fauna. Each specimen is labelled and assigned a catalogue number, and plant records are also kept on a database. The garden is also complemented by the adjacent Inala Nature Museum, which contains fossilised representatives of some of the living taxa growing in the garden. The garden logo was created from merging an image of the foliage of a living Wollemi Pine, which is growing in the garden, and a 175-million-year-old Jurassic fossil of the extinct Agathis Jurassic, which looks almost identical.

We are keen to work together with other plant enthusiasts and are proud to play our part in enabling these ancient plants to continue way into the future.