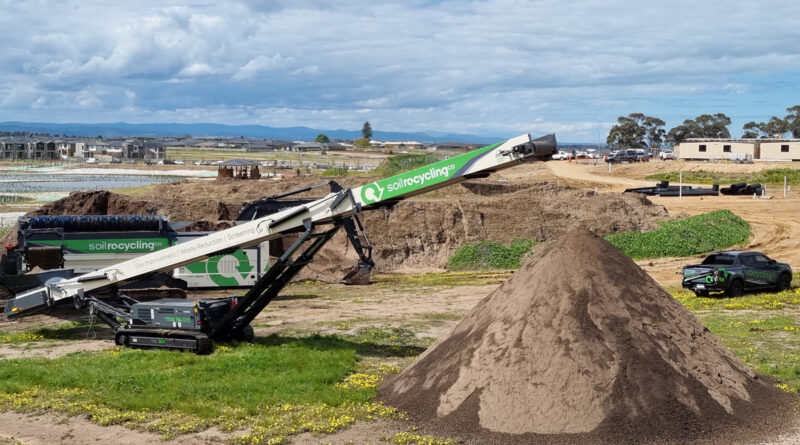 As Victoria moves to a circular economy and its landfill levies increase, one business in that state has learnt that doing more with existing soils on site, makes better sense environmentally and financially. Their recycling story will make you rethink how you reuse existing soils on site in your landscaping projects.

Chris Keay, Owner and Director of Soil Recycling Co, has worked as a residential and commercial landscaper for over fifteen years. Almost two years ago, Chris started his soil recycling business after experiencing frustration sourcing local topsoils to an un-achievable project specification. “With a little TLC, there are perfectly healthy topsoils on site. What usually happens is that the civil or landscape contractor excavates the topsoil on site, before disposing of it to a landfill site or a recycling depot. These contractors would then import the same or similar material back in to the site. This was not making any sense to me as a landscaper with a sustainability hat on,” says Chris. So, he turned to soil recycling to enhance the soil resource and environmental outcomes of landscaping projects by reducing the volume of soil leaving sites.

How soil is recycled on commercial projects

Chris explains his soil recycling process: “Put simply, soil recycling is the process of recycling onsite topsoil by blending amendments to produce healthy soils for reuse. Soil Recycling Co is a fully mobile business, with materials sorted and blended on site using a range of front-end loaders, compact track loaders (Posi-Tracks), large excavators, and a trommel. Once the topsoil is stripped and placed into a large stockpile on site, we then mix this soil in a trommel which is basically just a large cylinder screen about 5.5m long by 2m high. We put the existing topsoil from the site into the trommel and mix it with compost, fertiliser and/or minerals, to the ratio recommended by the soil agronomist to enhance the soil resource.”

Moving towards a circular economy

Compost is a material Chris currently finds in abundance, in part at least, due to the Victorian Government’s big push towards a circular economy. The Victorian Government’s ambitious new 10-year plan, Recycling Victoria: A new economy, aims for all Victorian households to gain access to a new four-stream waste and recycling system including food organics and garden organics (FOGO). Chris claims that the volumes of material already coming from FOGO bins means that composters have surplus amounts of compost for which they are seeking customers. He sees it as his duty to close the loop to ensure that the circular economy does not revert to a linear one, using this compost along with ameliorants and fertilisers to replenish existing topsoils.

Soil Recycling Co recently worked with Hutchinson Builders to recycle the topsoil on three school sites in Clyde North and Greenvale, through a Victorian Schools Building Authority (VSBA) initiative. The soil was reused on lawn and garden bed areas. Chris claims that 4,395 cubic metres of material were diverted from landfill, resulting in savings of around $282,000 for the client. Chris says a large part of these savings were made by reducing the plant and equipment needed to remove the material from site to begin with. Further savings were made as the number of trips trucks needed to make, to remove soil from the sites, were reduced, thereby lowering fuel costs and avoiding over 22 tons of greenhouse gas emissions, as well as avoiding the cost to import ‘new’ topsoils. The Soil Recycling Co also has a partnership with Greenfleet Australia, and to offset the greenhouse gas emissions generated by this project, Greenfleet Australia are planting 117 trees in regional/rural Australia.

When your overburden is not a burden

Chris encourages landscapers to rethink the soils on site, especially the material which is traditionally seen as ‘overburden’. “If you have got a material that you think is not suitable for soil, it may be suitable for something else,” says Chris, “We may be able to screen rocks out of it for other purposes. For example, we can separate the rocks and then send the rocks to a recycling centre where they can be turned into crushed rock. We could separate a ballast out of from this material and use it in a driveway. We might also take out larger clay particles to use as clean fill on site.”

Doing more with existing materials on site is becoming increasingly important for all involved in the landscaping industry as landfill levies increase, meaning disposal offsite will become more expensive. The Victorian Government has set targets to divert 80% of waste from landfill by 2030, with an interim target of 72% by 20251. Victoria’s landfill levy is set to double by 2023, with the levy for metropolitan household and business waste rising to $125.90 per tonne2. Other states have adopted similar measures.

“Our mission is to reduce organic waste through innovative and environmentally responsible solutions. We believe there is a better way to utilise the soil resource in the industrial and environmental space. A more valuable, less invasive way of doing things, where biodiversity flourishes and the planet is happier for it,” concludes Chris.