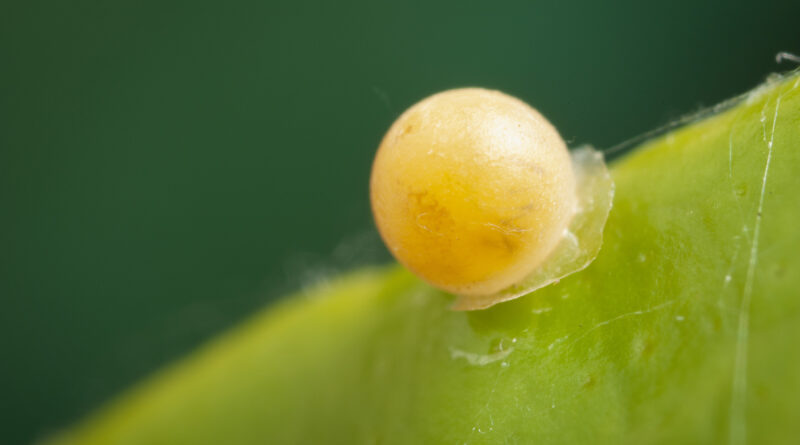 For insects which go through a lifecycle of complete metamorphosis, the pupal stage is a critical one. But sometimes the pupal process is not smooth sailing.

The pupal stage follows the larval stages and precedes the adult stage. Complete metamorphosis means larvae are very different in shape and form from adults of that species. You only have to think of how different a caterpillar is from a butterfly to see that metamorphosis is indeed complete.

The insect that inspired this Pest Files is a butterfly known as a Dainty Swallowtail (Papilio anactus). This species is endemic to eastern Australia, in a range extending from Cape York in Queensland, around the east and south-eastern coast, to Adelaide in South Australia. Its native larval food is native citrus and it has adapted to feeding on various cultivated citrus plants. Consequently, the Dainty Swallowtail is also known as the Small Citrus Butterfly.

The adult is the smallest swallowtail butterfly in Australia with a wingspan of about 70 mm. It is a black, grey and white butterfly with red and blue spots on the hindwings. In my garden, female butterflies laid eggs one at a time on the tips of new growth of a lime tree. The eggs hatched into small blue-black larvae with orange spots and over a few weeks grew into large (about 40 mm long) brown larvae with orange and bluish spots. When disturbed, the larvae evert a bright orange forked and smelly gland known as an ‘osmeterium’. The smell reminds me of rotting fruit.

When a larva is ready to pupate, it spins a small silk pad on a twig and the larva attaches itself to the silk pad with hooks on its hind legs. It orients itself head upwards and spins another small silk patch to which it attaches a silk girdle which it wraps around itself.  The result is not unlike a rock climber leaning out from a rock wall on a climbing harness anchored to the rock. The larva then moults its larval skin for the final time and secretes a pupal skin, which is much thicker and stronger, and begins the process of changing itself into a Swallowtail butterfly.

The first thing that happens is enzymes are released which digest most of the caterpillar’s own internal tissue in a process called histolysis. Some cells remain undigested. These are the imaginal discs or histoblasts, which the caterpillar has carried throughout all its larval moults hidden in various parts of its body. These histoblasts are like the embryonic cells of different parts of the adult body, which now begin to form in a process known as histogenesis.

As the process progresses, the outlines of adult butterfly features, wings, eyes, proboscis, antennae, legs and abdomen, become visible on the surface of the pupal skin. This process takes a couple of weeks to a few months, depending on the temperature and the time of year. Larvae which pupate in autumn usually don’t emerge as adults until the following spring. During this time, the pupa goes into a period of suspended growth known as diapause. Diapause acts as a delaying mechanism, synchronising the insect’s development with more favourable conditions like those of spring.

A cocoon is something many moth species create when pupating – it is basically a silken bag around a pupa. The moths which pupate underground usually do not create a cocoon.

Sometimes the pupal stage is referred to as being the ‘immobile’ or ‘resting’ stage. Anyone who has ever seen a mosquito pupa (known as a tumbler) dive rapidly when disturbed, or picked up a moth pupa which tries to wriggle out of your hand, knows that pupae are not immobile. Sure, most pupae like those of our Dainty Swallowtail don’t wander around but there is certainly a lot of physiological activity going on inside, so biologically speaking, they are hardly ‘resting’. They can exchange gases (i.e., breathe) too; they have specialised holes known as spiracles through which they can draw in oxygen and remove carbon dioxide. What pupae don’t do is feed, so the pupal stage is more correctly known as a non-feeding stage.

For growers, it means that your plants will have a reprieve from caterpillar damage. Insect pupae are often cryptic or hidden, so the pupal stage is not necessarily a practical stage to control an insect if it is a pest. However, if you do find pupae and you know what they are, they are not going to crawl away from you. Chooks love insect pupae apparently.

Once the pupation process is over and an adult has formed inside the pupal skin, it must get out – a process known as eclosion. Butterflies usually escape the chrysalis by sucking in air and then pumping it under pressure into the pupal case which eventually splits along the back of the thorax. The head of the butterfly emerges first, followed by the body. Initially, the wings of the butterfly will be crumpled but after half an hour or so, the wings expand as blood is pumped into them. The butterfly then flies away to find a mate and start the next generation.

Pupation is not always successful. Printed here is an image of a half caterpillar/half pupa. Something has gone terribly wrong when the larva has tried to moult that final time. It looks to me like the silk girdle was too tight for the whole larval skin to come off. The final moult is a vulnerable stage because the pupal skin underneath is very soft when first formed.

Pupae are also targeted by wasps that are specialist pupal parasites. Some of the Swallowtail pupae on my lime tree have been parasitised by the wasp, Pteromalus puparum. This wasp, the cabbage white butterfly pupal parasite, was introduced into Australia in the 1940’s to help control cabbage white butterfly (Pieris rapae. Unfortunately, the wasp also attacks native butterflies in the families Pieridae, Nymphalidae and Papilionidae (the Swallowtail family).

Female Pteromalus puparum wasps follow, and even ride on the backs of the caterpillars (shown here) until they pupate. Immediately after the caterpillar pupates, female wasps insert many eggs (up to about 200) into the soft pupa. This year was a very good year for cabbage white butterflies with record numbers building up, so I assume there are more P. puparum wasps about than usual, as predators and parasites also build up in numbers, particularly towards the end of the season. I am seeing more parasitic wasps than I have ever seen before, and I am not expecting many swallowtail butterflies to emerge from the pupae on my lime tree. The release of biological control agents in Australia is much more environmentally sensitive than back in the 1940’s. The release of a parasitic wasp with such a wide host range would simply not happen now.

Despite a number of large caterpillars feeding on my lime tree, I would have to say the resulting damage is minor. I am prepared to live with a few chewed leaves in order to have beautiful butterflies in my garden. They are native insects after all.